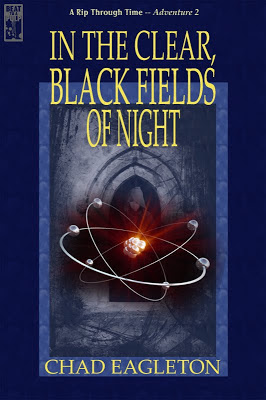 Book description: In his first adventure, Simon Rip pursued Dr. Robert Berlin from the Ice Age to the end of time to retrieve the most powerful invention the world has ever known, the Baryon Core. Now, with his employer's schemes to control all of time revealed, Rip travels across the centuries assembling a team to stop The Company once and for all. With the assistance of Ada Lovelace, Allegra Byron, John Whiteside Parsons, and a mysterious young boy imprisoned in a medieval monastery, the daring time-cop takes the fight directly to The Company. He'll trace the origins of the conspiracy to the darkest heart of World War II, uncover the mastermind, and discover the secrets of his own past.
Posted by David Cranmer at 7:00 AM
Email ThisBlogThis!Share to TwitterShare to FacebookShare to Pinterest
Labels: Ada Lovelace, Allegra Byron, BEAT to a PULP, Chad Eagleton, John Whiteside Parsons, Simon Rip

That's a nice cover and a sharp title.

And you make a cameo appearance, Garn. Can't thank you enough for "Loose Ends."

I dig the cover. Would comment on your blog more often, but can only do it from my computer.

I understand, Stacy. I have a habit of using one computer for one thing and another for something else. I appreciate you stopping by when you can and for your BIG support on Twitter.