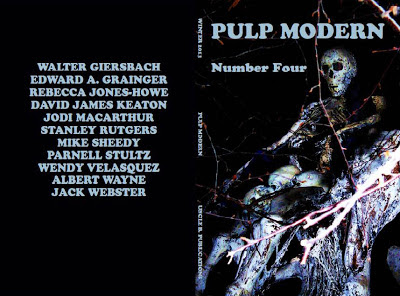 Pulp Modern Number Four features my latest Cash Laramie story, "Merciless." This hardboiled post-western follows the Outlaw Marshal into the 1920s. Cash still lives in Cheyenne but the town around him has changed and not for the better. Men are soft and the beer is watered down. Then, to top it off, the seventy-year-old Cash is challenged by a young upstart who knocks down the famed lawman in the saloon he's frequented for the last quarter century. With a bruised ego, Cash limps home to an unloving girlfriend who's been hounding him to sell his memoirs for a few dollars. What's left? Well, a final showdown between the 'civilized' world and a man who knows how to be merciless. This story may be the last chronologically for Cash Laramie. I had a helluva lot of fun writing it with gracious help from Chuck Tyrell. And thanks to editor Alec Cizak.
Posted by David Cranmer at 7:34 PM 8 comments:
Email ThisBlogThis!Share to TwitterShare to FacebookShare to Pinterest
Labels: Alec Cizak, Cash Laramie, Chuck Tyrell, Pulp Modern, The Outlaw Marshal, western

Five Years Begins at BEAT to a PULP

Five years begins today at BEAT to a PULP. Damn, that time has bulleted by, and who am I to drag it down with pretentious meanderings. So, real quick, HUGE thanks to the writers and editors who made it an award-winning and successful run to date. Now, let’s get to 2013 and our story of international intrigue by Andrew Nette called “One Ashore in Singapore.”
Posted by David Cranmer at 9:21 AM 8 comments:
Email ThisBlogThis!Share to TwitterShare to FacebookShare to Pinterest
Labels: Andrew Nette, BEAT to a PULP, Pulp of the Week 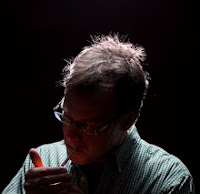 ... many of the projects he’s working on and that crosses over into several I’m involved with like Cash Laramie, Gideon Miles, and Hawthorne. Take a look at Man Plans, Fate Laughs its Ass Off.
Posted by David Cranmer at 8:54 AM 4 comments:
Email ThisBlogThis!Share to TwitterShare to FacebookShare to Pinterest
Labels: Cash Laramie, Gideon Miles, Hawthorne, Heath Lowrance

My little family has been hit hard with colds. Nice way to start the new year, huh? Ava first, followed by Little d, and now me. I swear by Airborne because my symptoms are not as severe as my charmers and I’ve been popping ‘em into my drinks like an addict. And because I’m paranoid, I probably just jinxed myself with the previous sentence. Anyway, both charmers went to the doctor and were prescribed antibiotics and are starting to feel better.

Which reminds me of a pet peeve of mine. Every year at this time, some person will remark that s/he has the flu and needs to get antibiotics. Person #2 chimes in that antibiotics don’t work for the flu, but says it like a question because s/he’s not sure. Person #1, embarrassed that s/he doesn’t know what s/he’s talking about, turns to others who weigh in pro and con. This goes back and forth several times until someone goes on the Internet. In the old days, this conversation never got resolved so life has improved, and it has dropped this pet peeve lower on my list, but it’s still in the top twenty. Wanna know numero uno? It’s this: on December 31st at least three people looked at me, smiled, and said, “See ‘ya next year.” I killed all three before the smiles left their faces.

Last but not least. Jake Hinkson’s THE POSTHUMOUS MAN (released through our BEAT to a PULP Books) is garnering many positive reviews.

And Brian Lindenmuth just selected it as one of his best of reads of 2012. Please jump over to Spinetingler and take a look when you get a chance.

THE POSTHUMOUS MAN is every bit as crazily entertaining as Hinkson's hard-rocking debut, HELL ON CHURCH STREET, and it reads like a streamliner rocketing across the Bonneville Salt Flats.

--Scott Phillips, award winning author of THE ICE HARVEST and THE ADJUSTMENT.
Posted by David Cranmer at 9:10 AM 11 comments:
Email ThisBlogThis!Share to TwitterShare to FacebookShare to Pinterest
Labels: BEAT to a PULP, Cranmer, Jake Hinkson, Scott Phillips, Spinetingler Magazine, The Posthumous Man

I've added to our Take Note page over at BEAT to a PULP and will be updating on a more regular basis. Please check it out when you get a chance.