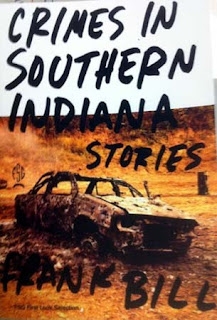 Frank Bill is the laureate of the working class hero. His characters have been pushed down, stomped on, and trampled over until they've reached their breaking points, and they are striking back to claim any little piece of ground they can get. Bill’s style has been keenly compared to Woodrell, McCarthy, and Thompson. He builds on their legacy, creating an impressive, unique style all his own.

Don't miss out on this exceptional collection now available.

A very touching review of ADVENTURES from Sabrina Ogden

And I hit #2 on the top rated chart. I thank everyone on Blogger, Twitter, and Google+ who made this happen.
Posted by David Cranmer at 5:12 PM 7 comments:
Email ThisBlogThis!Share to TwitterShare to FacebookShare to Pinterest
Labels: Cash Laramie, Gideon Miles, review, Sabrina Ogden

My story "Clouds in a Bunker" is featured in PULP INK. This antho features the spectacular talents of the following: 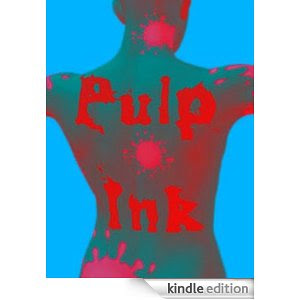 PULP INK is the bizarre, chaotic side of crime fiction. From an ass-kicking surfer on acid to an idiot savant hitboy, these tales are dark, funny, action-packed and told with all the gleeful insanity of a Tarantino flick.

Magnum Gray in My Storytelling

I’ve been pondering the gray area in my storytelling, specifically where my ideas originated on social justice and the antiheroes who cross the line to administer it.

I grew up with wonderful, caring parents who doted on me, and I, in turn, loved them immensely. No rebellious years for me unless you count sneaking in a few Playboy magazines. Mom and Dad brought me up by The Golden Rule, and when they reached their late forties, they became Baptists. We went to church three times a week where I continued to be taught right from wrong. Jesus is good. Satan is evil. No middle ground. No gray area. At the same time, my mom loved old movies (Humphrey Bogart, Errol Flynn, Ronald Coleman, etc.) and my dad watched westerns (Gunsmoke and The Rifleman were favorites). Most of these heroes were straight forward with little conflict. They were good and did the right thing. That made up my foundation.

Then along came Magnum, P.I. I wanted to be Tom Selleck’s Magnum. He was the good guy that men liked and women wanted. He lived on a rich estate. He drove a red Ferrari. What’s not to like, right? Other kids in school and church watched Magnum and none of our parents were bothered by the show--it seems silly to say these days, but to some straight-laced folks back then, bikinis and violence could corrupt a child’s mind. Yet, Magnum was considered safe, an all-American hero. Until the 1982 episode called “Did You See the Sunrise.”

The plot: It starts with Magnum and T.C. (another of the show’s regulars) meeting up with an old Army buddy named Nuzo who warns them that a former rival named Ivan is back to settle a score. Nuzo reminds them that they were the only three to escape Ivan’s prison camp in ‘Nam. SPOILER ALERT: Ivan is now a high-priced assassin who has come to Hawaii to kill a Japanese prince. Magnum and his buddies thwart the attempt, but, in the process, Magnum’s friend Mac is murdered by Ivan. Because of some political red tape, the government has to let Ivan go free. That doesn’t sit well with Magnum:

Holy crap! The next day, everyone I knew was talking about this final scene. Magnum, our hero, killed someone in cold blood! It was wrong! But it was ok! My mom said it was bad! My mom said it was right! I pondered this scene for weeks, coming to the realization that life is made up of gray areas that people don’t seem to like to talk or even think about.

It was this episode of Magnum that sparked it all for me, unwittingly creating the germ of my fictional antihero, Cash Laramie, the outlaw marshal. Though, as you can see by Adventures of Cash Laramie and Gideon Miles, Cash goes beyond Magnum’s one-time, cold-blood rage and will often hunt down these monsters. His behavior gives him a sense of doubt at times, and eventually it leads him to a harsh reality in "Reflections in a Glass of Maryland Rye" (featured in the upcoming ADVENTURES Volume II).

Sorry to be so long winded and rambling on you, folks. I'm sure tracing the development of my character to one of my favorite television heroes interests me more than anyone else. But, it's not every day I have such an eye-opening moment.
Posted by David Cranmer at 8:33 AM 24 comments:
Email ThisBlogThis!Share to TwitterShare to FacebookShare to Pinterest
Labels: Cash Laramie, Magnum, P.I., Tom Selleck 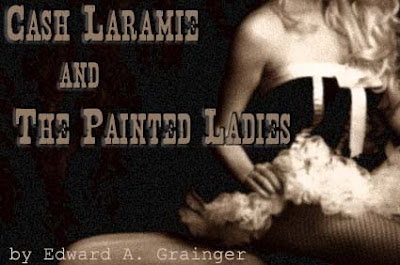 "Cash Laramie and the Painted Ladies" in issue #7 of Crime Factory.