And So This Was Christmas

Going into this holiday season, I wasn’t sure how my family would cope, being our first Christmas without Kyle. But—I don’t know how to put this in words—it was good, and I think it’s because we chose to remember him rather than mourn him. We pulled together and had sweatshirts made that feature his Pluvial Gardens book cover on the front and text from the poem on the back with his name and life years. We all put our shirts on and then went outside for a photo in the snow. I’ve worn it each day since. Maybe, I’ll give it a rest tomorrow—maybe.

My sister surprised her husband with this ornament—the photo below was taken by my brother-in-law, Bob—a symbol of a father and son's shared passion for music, and he got her a sapphire necklace, the stone for Kyle's birth month September. Very touching. Christmas 2013 for us was about a family that lost a very special member, about how we got knocked down but not out, how we took as much of the sting out of our pain as we could, how we’re stronger now because he’s still with us in his words and in spirit. Always will be. 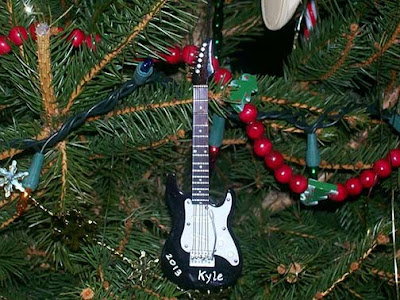 I hope all of you find some peace this season. From my family to yours, we wish you the best of New Years.
Posted by David Cranmer at 5:46 PM 14 comments:
Email ThisBlogThis!Share to TwitterShare to FacebookShare to Pinterest
Labels: Christmas, Cranmer, Kyle J. Knapp, music, Pluvial Gardens

From The Atlantic: Why so many screen adaptations of the work of America’s most cinematic novelist are so bad—and what makes the exceptions, like TV’s Justified, so good by Christopher Orr.
Posted by David Cranmer at 5:29 AM No comments:
Email ThisBlogThis!Share to TwitterShare to FacebookShare to Pinterest
Labels: Christopher Orr, Elmore Leonard, The Atlantic

The Time of the Doctor

Posted by David Cranmer at 6:46 PM 4 comments:
Email ThisBlogThis!Share to TwitterShare to FacebookShare to Pinterest
Labels: Dr. Who

Crime writer with a slab of ice in his heart

Georges Simenon’s beefy but sympathetic Maigret – whose exploits are now being republished – was an exercise in fantastical self-projection by AN Wilson.
Posted by David Cranmer at 5:34 AM 4 comments:
Email ThisBlogThis!Share to TwitterShare to FacebookShare to Pinterest
Labels: Georges Simenons, Maigret

William Shakespeare’s Merchant of Venice was in a packed away box at the new house. I took it out, away from its brothers and sisters—King Richard The Third, Macbeth, King Lear, etc—and opened it up. From 1895 ... 118 years ago! The original owner, Arden N., inscribed his name in pencil with the year 1899. For both a history buff and a lover of all things print, this was quite a find. The books from Harper & Brothers was edited with notes by William J. Rolfe.

Wikipedia adds a little spotlight to this find:

He graduated from Amherst in 1849, and between 1852 and 1868 was head master of high schools at Dorchester, Lawrence, Salem, and Cambridge, Massachusetts.

Early in his career, he edited selections from Ovid and Virgil and (in collaboration) the Cambridge Course of Physics (six volumes, 1867–68).

His Shakespearean work began with an edition of George Lillie Craik’s English of Shakespeare (1867). This led to the preparation of a complete edition - the Friendly Edition - of Shakespeare (forty volumes, 1870–83; new edition, 1903–07).

These little, red books have sharp illustrations and comprehensive introductions by Rolfe. Now this is where I get downright, uh, nerdy, but how remarkable that I’m holding a book from many decades past and in such pristine condition! Actually the first copyright was 1870—a hundred years before I was born—containing words that are around 415 years old! As a humble publisher and pulp hack, I would be exceedingly glad to be remembered thirty minutes from now let alone the century mark. 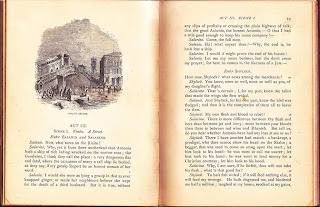 I turn to my latest effort which is a print version of Adventures of Cash Laramie and Gideon Miles (first released in 2011 as an ebook, now approaching 120 reviews on Amazon, and heading toward deeper parts of the great pulp stream). I’ve added an extra story, and I ponder for the shortest of seconds that someone will be reading those words in 2113. 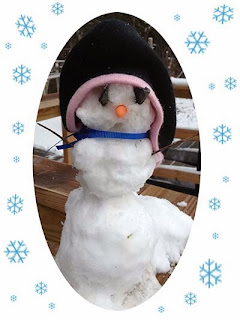 We didn’t get as much snow as expected, but it was enough to have some fun sledding down the little hill in front of our house. This is the first winter that I'm sure our daughter will begin developing some memories of making snow angels, sledding, and bringing snowmen to life--and our first snowman attempt had me chuckling! Not quite enough wet snow so we had to keep him tiny in stature. The stone eyes were too big for the face and Ava’s hat a size too large. But with that carrot button-nose, overall, we like our fantastic, sad, little snowman.
Posted by David Cranmer at 2:36 PM 14 comments:
Email ThisBlogThis!Share to TwitterShare to FacebookShare to Pinterest
Labels: Cranmer, snowman

The Fall Creek Review is the beginning of something I think will be very special. A new webzine devoted to poetry, stories, art, and opinion edited by Cole Montegue. A very spare site at the moment, but I’m aware of what lies ahead and I think you are going to want to bookmark this page. By that first poem, well, maybe just me, but I feel The Fall Creek Review is off to an inspired start. Please stop by and drop a comment. It will be appreciated.