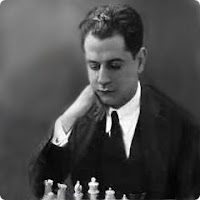 It was night. I went home and put my old house clothes on and set the chessmen out and mixed a drink and played over another Capablanca. It went fifty-nine moves. Beautiful cold remorseless chess, almost creepy in its silent implacability.

When it was done I listened at the open window for a while and smelled the night. Then I carried my glass out to the kitchen and rinsed it and filled it with ice water and stood at the sink sipping it and looking at my face in the mirror.

"You and Capablanca'" I said.

An Angel For A Charlie Brown Tree

There's a Charlie Brown tree growing on site where I'm working. Someone came up with the idea to decorate it for Christmas, so a bunch of us got together, hung ornaments and placed boxes wrapped up as presents underneath. But without a doubt, la pièce de résistance is from a welder who used 2 ought wire to construct an angel for the tree top.

Merry Christmas everyone.
Posted by David Cranmer at 11:54 AM 20 comments:
Email ThisBlogThis!Share to TwitterShare to FacebookShare to Pinterest
Labels: holiday 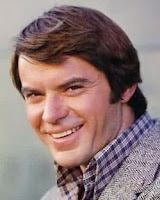 It seems when I was a kid there wasn’t a time that Robert Urich (December 19, 1946 – April 16, 2002) wasn’t on television. I grew up on S.W.A.T and Vega$ and because I am a fan of the Robert B. Parker novels, Spenser: For Hire was my favorite. A later gem was the western The Lazarus Man and it’s a shame that series didn’t continue. Interesting premise with his character being buried alive and what role he played in the Lincoln assassination. Of course, his role as Jake Spoon in Lonesome Dove was a highlight of a colorful career. And sadly Mr. Urich died far to young but we can celebrate that he was born on this date in 1946.
Posted by David Cranmer at 1:01 AM 16 comments:
Email ThisBlogThis!Share to TwitterShare to FacebookShare to Pinterest
Labels: random

BTAP #54: Shut Up and Kill Me by Robert J. Randisi

Last month on the 46th anniversary of the Kennedy assassination (no lie), David Cranmer asked me to introduce the final BEAT to a PULP story of the year...a story by Private Eye Writer's of America co-founder and mystery writer extraordinaire, Robert J. Randisi. 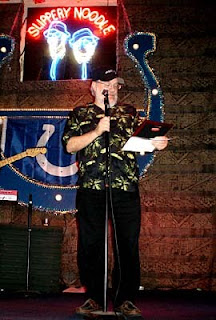 I guess David picked me because I had some correspondence with Bob a year or so ago when he offered to critique a story of mine that ended up in Ellery Queen Mystery Magazine--one that drew the wrath of one subscriber (so I'm told by the editor) that said subscriber nearly stroked out on her doily-covered sofa. Bob was so helpful and generous with his time. If you ever get a chance to meet him you'll understand why he is adored and loved by so many.

Now then, how does one even fathom introducing a legend like Bob? Hmm. Do you go by the volume of fiction produced? Editorial credits? The genres? The characters? The wit? His amazing singing voice (...who knew? If you were at the Shamus Awards dinner this year, you'd swear Dean Martin had swaggered onto the stage).

The story sports a hard-boiled protagonist mystery fans haven't seen in a while--Nick Delvecchio (No Exit From Brooklyn, The Dead of Brooklyn)--and the story is called SHUT UP AND KILL ME. Read it. And buy Bob's books.

A Fistful of Legends

Here's the cover and back to A FISTFUL OF LEGENDS that'll feature my short story “Cash Laramie and the Masked Devil.” The publication date is set for 31 January 2010. Please click over to I.J. Parnham's site for full details. 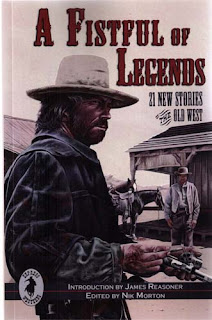 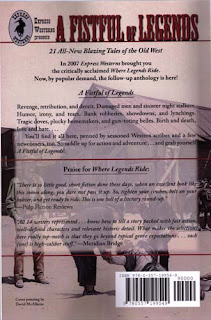 Posted by David Cranmer at 5:16 AM 24 comments:
Email ThisBlogThis!Share to TwitterShare to FacebookShare to Pinterest
Labels: book, western

Time To Make The Donuts

A quarter of a century later, I now know why my hard-working father laughed the loudest when this commercial first aired.
Posted by David Cranmer at 1:01 PM 16 comments:
Email ThisBlogThis!Share to TwitterShare to FacebookShare to Pinterest
Labels: random

BTAP #53: Charlie and Stevie Do a Repo by Kieran Shea 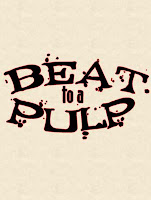 Kieran Shea returns to BTAP with another Charlie Byrne story. If you’re not familiar with Shea’s south Jersey shore P.I., well, what the hell are you waiting for? He’s free to read right now but I have no doubt that will change very soon. So click over to BEAT to a PULP for "Charlie and Stevie Do a Repo" and drop one of the finest amongst us a comment.

Heck, I’m not gonna tell ya who’s up next week. I’ll leave it as a surprise. Because a big occasion like wrapping up a very successful first year at BTAP needs a big finale. And we’ve got a BIG writer lined up. Hate to leave you hanging like this, but I know Kieran’s story will more than make up for it.
Posted by David Cranmer at 9:25 AM
Email ThisBlogThis!Share to TwitterShare to FacebookShare to Pinterest
Labels: BTAP, detective, ezine, pulp

This song has been lodged in my noggin for days. Is there a song from your playlist that sticks out to you?

Scott D. Parker left a comment on my Rex Stout post that was so damn good I couldn’t see leaving it marooned there. So, with his permission, I’ve reposted his thoughts below. But first, the Stout quote:

Scott, an aficionado of both Doyle and Dickens, had this to say:

Starting last year when I read The Man Who Invented Christmas (about how Dickens came to write A Christmas Carol), I've been in a Dickens mood all year. I read Dan Simmons' Drood and, recently, Matthew Pearl's The Last Dickens, both dealing with Boz's last, unfinished novel, The Mystery of Edwin Drood. I'm going to read the actual Drood in January. Anyway, most books written more than a century ago about a foreign land is, by my mind, removed. What matters is how well the author can speak to a reader a century or more removed.

Dickens, to me, speaks both to his contemporary readership (with his social concerns) but also to us 21st-Century readers (with his timeless tales). His characters are vivid, to be sure, but there is an obvious over-the-topness to many of them. That's why they are so memorable and why words like "Fagin" have become shorthand. Moreover, Dickens' writing style is purposefully fancy in many places. You know you are reading a great writer and he shows off a lot.

Doyle and Holmes, on the other hand, seem to be somewhat more real. True, they both write in the same era but the characters in the Holmes stories are largely nameless. Other than the big names (Holmes, Watson, Mrs. Hudson, Lestrade, Irene Adler, Prof. Moriarty, Mycroft, Sir Henry Baskerville), how many other Holmes characters can you name? Quick: name the guy who steals the carbuncle? Who owns Silver Blaze? Because Doyle's characters are "regular" joes, there's not a lot to help us readers remember them. They are normal and, by extension, more real, to me, than Scrooge, Copperfield, or Little Dorrit. Doyle's writing style, aside from a few Victorianisms and speaking patterns, is pretty modern. You pluck a Doyle story aside a Block story and modern audiences would enjoy and be familiar with both.

Long story short, and, upon further thought, I, too, might change my mind, but I'm going to agree with Stout's comment. Ironically, I've read only one Stout book--Nero Wolf's first adventure--and didn't like it. I may have to give him another try.

Who is more real to you: Dickens or Doyle? Or neither? I'm a fan of Doyle but initially disagreed with the Rex Stout quote because Sherlock Holmes, for me, exists in the same removed sense that Stout attributes to Dickens. But after considering Mr. Parker's astute reasoning, I can clearly understand that point of view. How about you? And is there another character in fiction that you enjoy but is not fully believable?
Posted by David Cranmer at 1:01 AM 17 comments:
Email ThisBlogThis!Share to TwitterShare to FacebookShare to Pinterest
Labels: character, writing

As I prepared for an extended boat ride, knowing I'd have plenty of time to read, I grabbed some old favorites off the bookshelf and packed them in my suitcase. I realized after lugging around an extra 10 pounds of paper that I should have followed in the footsteps of Clare2e, who has championed the new technology, by purchasing a Kindle. I'll keep it in mind for the next time, but for this trip, one book that proved it's worth in excess weight was Raymond Chandler's THE HIGH WINDOW. Here are two famous lines from this classic: 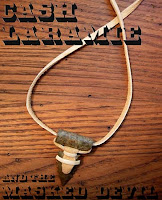 And now from my short story "Cash Laramie and the Masked Devil," coming out soon, are two lines from a scene where Cash is examining the grisly remains of a fellow marshal:

The sword’s entry through the soft tissue of the neck and exit point through the mouth had ripped the tongue and left it dangling. The detached ear lay in the box next to the head.

"Hemingway never grew out of adolescence. His scope and depth stayed shallow because he had no idea what women are for."

"One of the hardest things to believe is that anyone will abandon the effort to escape a charge of murder. It is extremely important to suspend disbelief on that. If you don't, the story is spoiled."

"If I'm home with no chore at hand, and a package of books has come, the television set and the chess board and the unanswered mail will have to manage without me if one of the books is a detective story."

"I thought if you’re merely good and not great, what is the use of putting all that agony into it?"

"Everything in a story should be credible."

"Nothing is more admirable than the fortitude with which millionaires tolerate the disadvantages of their wealth."

"Of course the modern detective story puts off its best tricks till the last, but Doyle always put his best tricks first and that's why they're still the best ones."

"I have a strong moral sense - by my standards."

"I have never regarded myself as this or that. I have been too busy being myself to bother about regarding myself."
Posted by David Cranmer at 1:01 AM 12 comments:
Email ThisBlogThis!Share to TwitterShare to FacebookShare to Pinterest
Labels: quote
Newer Posts Older Posts Home
Subscribe to: Posts (Atom)