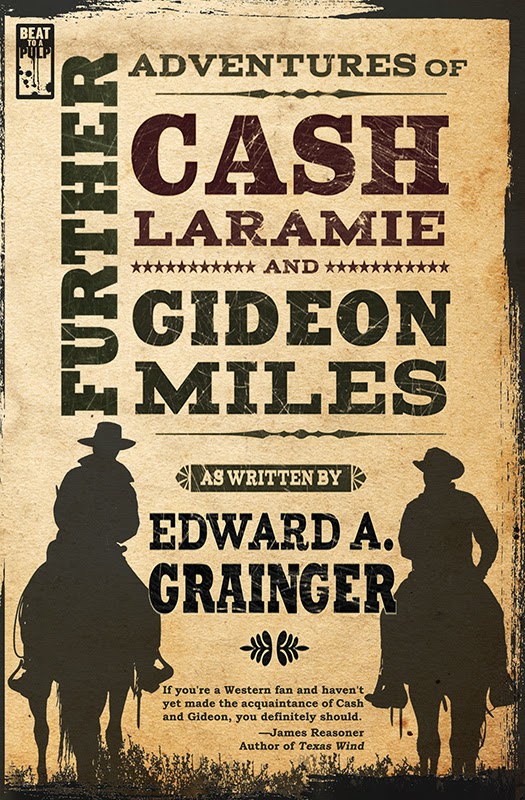 More of my mother’s past creativity: Here is one of many Queen’s Guards that Mom made out of clothes pins and small pom-poms. These sentries faithfully protect my sister Meta's Christmas tree each and every year. Sometimes they come under attack when Boomer the Dog’s happy tail swipes at them. Otherwise, they have a most pleasant assignment. 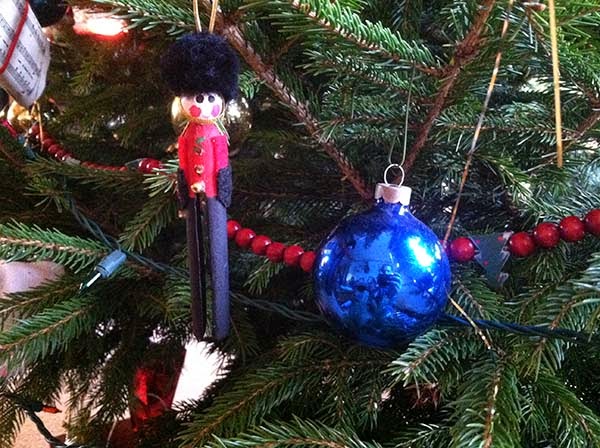 Posted by David Cranmer at 11:02 AM 5 comments:
Email ThisBlogThis!Share to TwitterShare to FacebookShare to Pinterest
Labels: Christmas, Cranmer, family

Rain on the leaves...

At 2 a.m. the little goose couldn't sleep and wanted to watch a show on the Kindle Fire. Once she was happily contented with M. Mouse—and with any luck our lesson is finally learned that there should be no chocolate consumed before bed—and my Charmer was back to sleep, I began working on an Errol Flynn article devoted to his Hollywood Westerns. I watched part of Sante Fe Trail (1940) and this leads to watching the documentary Tasmanian Devil: The Fast and Furious Life of Errol Flynn.
And that’s a long way around to saying it reminded me of “Sean Flynn” by The Clash from 1982’s Combat Rock. Errol’s son Sean, a freelance photojournalist for Time and United Press International, disappeared on April 6, 1970. His body was never found and it is believed he was held captive for over a year before being murdered by the Khmer Rouge. 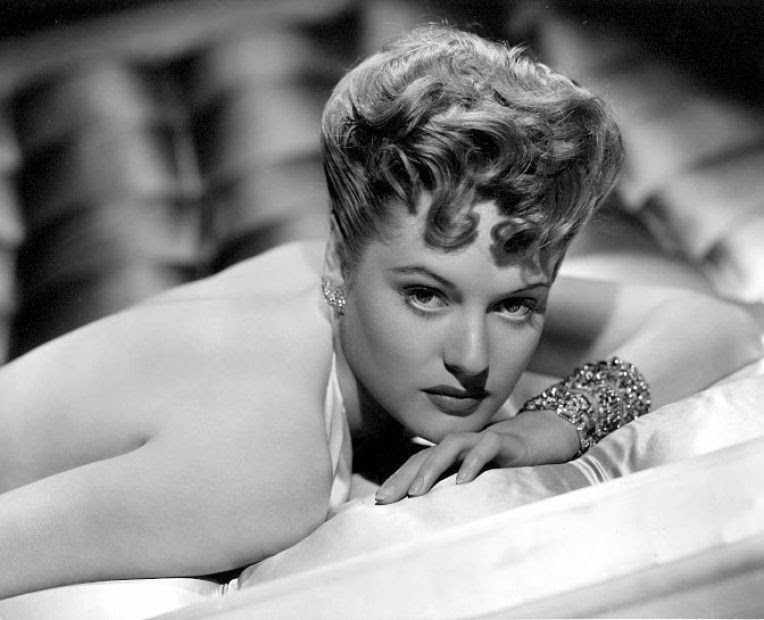 Alexis Smith (June 8, 1921 – June 9, 1993) was a versatile, Canadian-born actress who was equally at home playing in Hollywood Westerns, comedies, and noirs or just about any genre Tinseltown tossed her way. She played opposite many of the biggest Silver Screen draws including Humphrey Bogart, Barbara Stanwyck, Errol Flynn, and Cary Grant. The publicity machine of the era dubbed her the Dynamite Girl—casting her most often in the role of “The Other Woman”—and after two decades, she met her ultimate critical acclaim for 1959’s The Young Philadelphians opposite Paul Newman. Later, she turned to Broadway where she won a Tony Award in 1972 and in the very early 1990s was nominated for an Emmy Award for her guest appearance on an episode of Cheers. For nearly fifty years she was married to Peter Gunn’s Craig Stevens.

The rest of my article can be found at Macmillan's Criminal Element.
Posted by David Cranmer at 2:00 PM 5 comments:
Email ThisBlogThis!Share to TwitterShare to FacebookShare to Pinterest
Labels: Alexis Smith, Criminal Element, Edward A. Grainger, noir

The Lawyer: Stay of Execution by Wayne D. Dundee 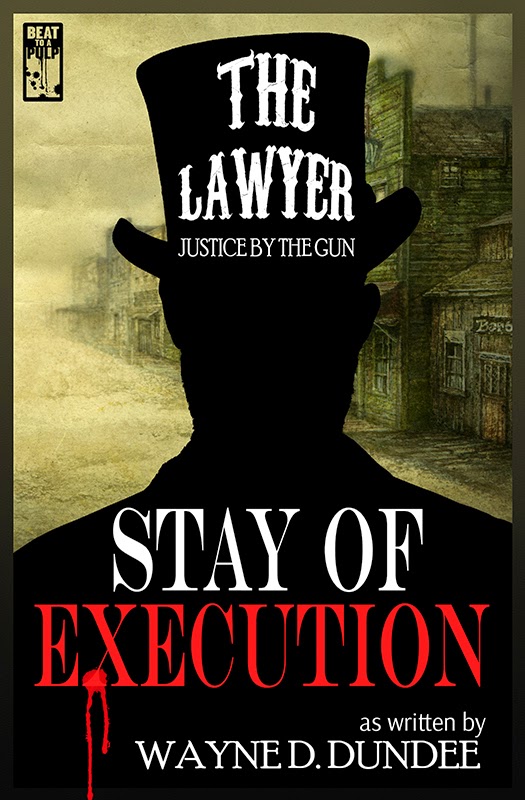 In the Old West, J.D. Miller had been an attorney at law. A respected and successful one. Until the horrific, soul-scarring day when he returned home to find his entire family gruesomely slaughtered—the charred remains scarcely recognizable in the smoldering ruins of what had once been their house. Like a phoenix rising out of the ashes, The Lawyer—a killing machine—was born, and he’s leaving a blood-splattered revenge trail as he searches out those who murdered his family.

THE LAWYER: STAY OF EXECUTION is the first novella in a thrilling new hard-boiled Western series by bestselling Amazon author Wayne D. Dundee (Manhunter’s Mountain, The Empty Badge) and BEAT to a PULP books. Based on characters created by Edward A. Grainger, author of the Cash Laramie and Gideon Miles adventures.

Night and the City 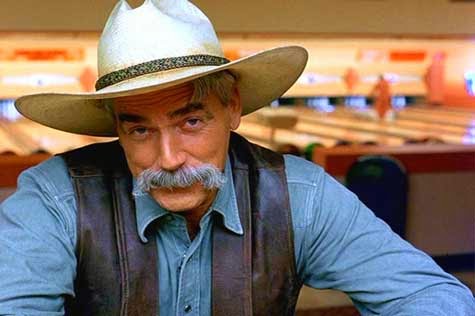 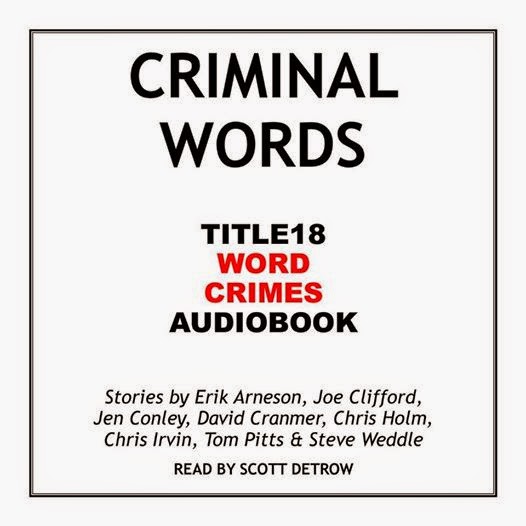 Here's a link to Erik's website and a little more information on the new release.
Posted by David Cranmer at 6:44 AM 4 comments:
Email ThisBlogThis!Share to TwitterShare to FacebookShare to Pinterest
Labels: audiobook, Cash Laramie, Criminal Words, Edward A. Grainger

Posted by David Cranmer at 2:35 PM 8 comments:
Email ThisBlogThis!Share to TwitterShare to FacebookShare to Pinterest 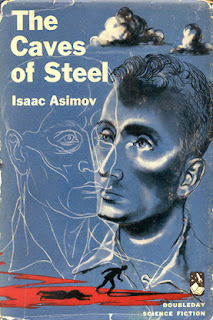 Elijah (“Lije”) Baley is a New York City homicide detective a few millennia into the future. His world is an overpopulated Earth with eight billion people living in massive, layered complexes—caves of steel—enclosed by mammoth domes. Washington, Baltimore, Philadelphia, and New York have grown to the point where they are almost touching. Humans no longer know what it is to see natural light (except the elite who live at the top) or experience the feeling of the wind on their back. Even the thought of walking outside their enclosed womb of a city is terrifying and many people like Elijah have agoraphobia.

There are fifty known planets, called Spacer worlds, where colonists have established new societies and have become wealthy due to their low population and abundant supplies, leaving Earth as the runt of the galaxy. The aptly named Spacers are deep intergalactic colonists who have returned to Earth, but their integration back on the home planet has its obstacles, the least of which is their fear of the diseased-riddled Earth since their own worlds are devoid of such maladies.

So a few months back, Erik Arneson approached me and asked if I had a story he could use for his topmost Word Crimes Podcast. I was just completing Further Adventures of Cash Laramie and Gideon Miles and thought “Merciless” would be a perfect fit, and thanks to Erik and the vocal talents of Scott Detrow it turns out to be something special indeed. This is a first for me, hearing my characters come alive, so to speak, in another medium.

“Merciless” features former lawman Cash Laramie—The Outlaw Marshal—at seventy-nine-years-old. His glory days far behind him, he’s traded his horse in for a car and sits most evenings in a Cheyenne bar conversing with the bartender. Another patron, a young loudmouth named Roberts, sets in motion a series of events that leads to a poignant, tragic ending.

I feel this one turned out pretty darn good, with special thanks going to my buddy Chuck Tyrell who had considerable input (and to whom I dedicate my latest collection). “Merciless” originally appeared in Pulp Modern Issue #4, edited by Alec Cizak.