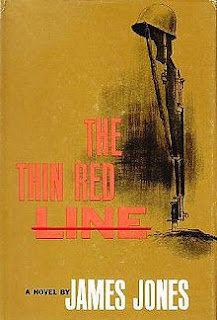 The Thin Red Line by James Jones
I’ve been asked, as a veteran, to come up with a few words on a novel that resonates personally. It didn’t take long to say yes and that I would like to take another look at the 1962 milestone by James Jones. He’s more known for From Here to Eternity but it’s The Thin Red Line that went deep into the hell that is war.

Basic Math and Pre-Algebra by Denise Szecsei
I DESPISED math as a kid. My parents hired a tutor because I had fallen so far behind in school, but I still refused to learn it (poor Mrs. Mudge! I apologize for being such a snot, dear lady). My recent interest in CERN and various physicists has sparked a fire to learn higher math. Just bought Basic Math and Pre-Algebra as a refresher ... it's amazing how those basics can fade from memory. So, start at the beginning, right? 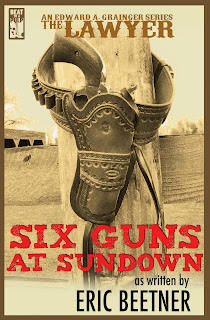 Six Guns at Sundown by Eric Beetner
Along with Little d (the real force behind BEAT to a PULP since its inception), I’ve been editing Eric’s first of two Lawyer novellas that pick up the narrative first laid down by Wayne D. Dundee in Stay of Execution. Both gentleman have done an outstanding job and for some foolhardy reason I have said that I will write the fifth installment.

Higgs Discovery: The Power of Empty by Lisa Randall
I’m almost obsessive with learning more about CERN’s latest accomplishments. Ms. Randall’s book is easy for simpleton’s like me to grasp.

Graveyard Love by Scott Adlerberg
My full review was published at Macmillan's Criminal Element blog. A sample: Adlerberg’s storytelling is reminiscent of Julio Cortázar conjuring up the befuddled photographer, in “Blow Up” (1959) or Vladimir Nabokov’s unhinged chocolate factory worker from Despair (1934) who erroneously believe he’s found his doppelganger. Both represent unreliable narration from a first-person psychotic point of view—doing their best to convince us they are 100% sane. Kurt is no different, telling us how he’s poles apart from other such obsessive stalkers but the more he makes a case for clear rationality the more it’s obvious he’s just plain nuts.

“Where is Planet 9” blog post by Mike Brown.
I’ve been an amateur astronomy buff since I was a kid. And as I now tell my daughter… we live in exciting times. I follow astronomer Mike Brown (he takes full glee in downsizing Pluto to dwarf status) on Twitter and noticed he tweeted that his daughter had suggested the name Lilah for the new 9th planet. So I replied, resulting in this exchange:

My four-year-old daughter, Ava, was opting for Sally. Her daddy has no idea why but thought I should pass it on.
Mikes' reply: it's now on the list.
You just made her day! Thanks, Mike.

And it did. She's aware the chance is slim of her suggestion being realized but having the scientist who's leading the search consider her proposal is a big, and exciting, deal.

"The Singular Mind of Terry Tao" article.
I get annoyed when I hear the word genius batted around carelessly. Terry Tao, however, was one at nine years of age. Fascinating piece on a child prodigy and what he's up to today.

A Universe from Nothing: Why there is Something Rather than Nothing by Lawrence M. Krauss
A theoretical physicist and cosmologist, Krauss has written a book that even my dense understanding can comprehend, uh, most of the time. Not just a book of facts and figures but also human interest stories. Example: how Edwin Hubble (a name we all know quite well) owes quite a bit to the unsung Henrietta Swan Leavitt who was employed as a "computer" at the Harvard Observatory.

The Age of Reason; Being an Investigation of True and Fabulous Theology by Thomas Paine
Perhaps it’s because political posturing is going into that tedious full pitch with Republicans and Democrats running to their corners, sharpening their daggers that I, once again, turn to Tom Paine. A revolutionary that had the cojones to take on George Washington. Not that The Age of Reason has anything to do with legislation of government—Paine’s Rights of Man and Common Sense handle those questions—but I like his logical voice and the topic of religion has been on my mind extra burdensome of late. Also pulled off my shelf this week is Jack Fruchtman’s Thomas Paine: Apostle of Freedom. And below is an audio clip of the late Christopher Hitchens on NPR discussing the man who coined the phrase, “these are the times that try men’s souls.”

Signs and Symbols but in Vane...

I review The Girl with the Deep Blue Eyes by Lawrence Block at Criminal Element.

Posted by David Cranmer at 3:20 PM
Email ThisBlogThis!Share to TwitterShare to FacebookShare to Pinterest
Labels: detective, Lawrence Block, review, The Girl with the Deep Blue Eyes

Heavy Water: and Other Stories by Martin Amis
Enjoyed several novels in 2015 from the younger Amis, and my captivation with his work stretches into 2016. This is a fine collection of older short stories that originally appeared in The New Yorker, Esquire, New Statesman, and other distinguished publications. Many of these nine tales are way, way, off-center which is perfectly fine by me. Here’s my article on Martin Amis published at Criminal Element.

The Gun and Beyond the Door by Phillip K. Dick
Grabbed these two shorts free from the Gutenberg Project. Early—and still evolving—PKD, but the quirky genius is already on display. “The Gun” finds travelers landing on a distant planet with no inhabitants though a significant piece of tech is still active and very lethal .... Next up, a husband buys a cuckoo clock for his wife who becomes obsessed with the possible living entity in“Beyond the Door.” Both pieces have an O. Henry style ending that, like William Sydney Porter, doesn't feel gimmicky. 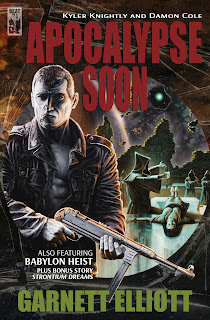 Carnosaur Weekend by Garnett Elliott
A reread because I’ll be proofing the forthcoming sequel “Apocalypse Soon” that continues the adventures of Kyler Knightly and Damon Cole through space and time.


To Kill a Dead Man by Icy Sedgwick
A western I’m proofing this week and that I should be releasing in the coming weeks through BEAT to a PULP. Also currently working on an interview with the engaging Ms. Sedgwick.

And Yet by Christopher Hitchens
Hitch, onetime Trotskyist, a lifelong Socialist, and mistaken for a Neocon during the Iraq War, had a way with words not just when he appeared on TV but was a dazzling stylist on the page. This smorgasbord of collected essays runs the gamut from dire warnings on why not to vote for Hillary Clinton to his unadorned respect for George Orwell. A liberal who was no ideologue and had few peers.

Things That Matter by Charles Krauthammer
From the Left with Hitch to the conservative side of the aisle with Krauthammer. A pundit who quite often leads the discussion within the GOP and currently one of Donald Trump’s strongest critics. But his best essays (many of which first appeared in The Washington Post) are when he’s talking chess, baseball, space exploration, and his late brother.

Opticks by Isaac Newton
My family has been watching Neil deGrasse Tyson’s narrated Cosmos and I was so intrigued by the section devoted to Newton that I decided to read one of his books. Not easy, per se, but I stuck with it because I wanted to spend an hour with this great theorist.

Damn! a Book of Calumny by H.L. Mencken
Always heard how revolutionary a political thinker Menken had been, and he remains a very compelling read. Every other page finds a quotable that seems relevant to our modern times. However, the anti-Semitism thread running through his body of work is jarring and I’ve read elsewhere he had a racist strain that Dorothy Parker found (as I would) inexcusable.

Of All Things by Robert C. Benchley
An almost forgotten humorist though he once loomed large on the American scene as a member, along with the aforementioned Ms. Parker, of The Algonquin Round Table. Dated in passages but still sharp in insight, especially as he pokes fun at an obsessive woman of letters when he imagines that even if she were kidnapped it would hardly slow down her incredible high word count ... reminded me a bit of certain Facebook/Twitter aficionados who don’t miss an opportunity to let the world in on the small minutia of their lives.


The Sandman, Volume 1, Preludes & Nocturnes by Neil Gaiman
In my top ten of the greatest graphic novel series ever produced and decided it was time for a re-read. The plot concerns Morpheus and his quest to regain his dream kingdom that has wasted away while he has been held in captivity for over a century.