A Conversation with Andy Henion 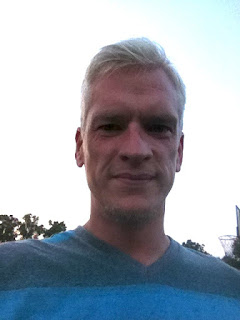 David Cranmer: So, what is Andy Henion reading?

Andy Henion: At the top of my print stack is Best American Mystery Stories 2015, edited by James Patterson. This is a yearly tradition for me. Inspiring. I haven't made the cut yet, though last year I had a piece in the "Other Distinguished Mystery Stories" shortlist. I'm also reading California by Edan Lepucki (a literary apocalyptic tale that's starting out slow, so far) and Pulp Fictions, edited by Peter Haining. On the Kindle is Gutshot, a collection of stories by Amelia Gray, and USA Noir, the Best of the Akashic Noir Series. I just finished a novel called Haints Stay by Colin Winnette that was excellent. How about you, David?

DC: I’ve been on a Martin Amis run for a couple of months having already devoured Night Train and London Fields. I’m currently enjoying his breakthrough Money from 1984. Guess I’m enjoying that prose stylist approach, you know, the flowering language. He’s a disciple of Saul Bellow who I admire a great deal myself.

You mentioned not making the cut yet for Best American Mystery Stories. Do you, deep down, have a need to appear in such an outlet to feel like you have arrived as a writer?

AH: No, but it’s a nice honor for a short story writer. A certain validation after publishing more than 100 shorts in the past 15 years. I’ve been shortlisted for a Derringer and nominated for a Pushcart as well; that stuff helps keep you going. Arriving, to me, implies more of a commercial breakthrough—topping the NY Times bestseller list, lunching with the Coens to discuss the screen version.

DC: For me, it’s making a living publishing books and writing. To be able to look back over a decade and be able to say I didn’t punch a clock. Speaking of publishing, BEAT to a PULP released your recent novella, The Devil in Snakeskins, which is described as a surreal post-apocalyptic Western. What are the influences for this offbeat mashup?

AH: Devil started as a short story I wrote for the now-defunct Thieves Jargon. I wanted to write about a bad-ass western gunslinger is all, something I hadn't done before. My imagination took it from there, filling in the odd world around him. As with most writers, I didn't purposely set out to make the story like anyone else's (and thankfully, several reviews have discussed its uniqueness), but looking back there were definite influences: Clint Eastwood's spaghetti westerns and Stephen King's Dark Tower chief among them. Also: a nod to post-apocalyptic fare such as The Book of Eli and Cormac McCarthy's The Road.

DC: One of the reasons I wanted to publish The Devil in Snakeskins is that the professor is completely amoral. So often in current fiction we have bad guys that only kill other bad guys or serial killers like Dexter who have a moral code. Blah! I want a bad guy to be like Henry Fonda in Once upon the Time in The West. 100% evil and I think that’s what you’ve done with your creation. Do you plan on writing more of the professor or is it back to crime fiction for you? 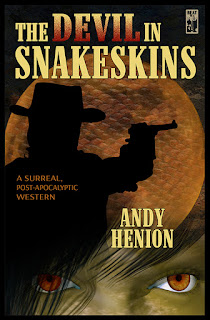 AH: He’s got a brutal past and a bullet lodged in his brain—damn right he’s cranky! And yes, he’s back, this time dealing head-on with the long-simmering effects of said bullet. And men with pinchers. And neck-eaters. And, well, I’m only 6,000 words in …

I believe the professor does discover a shred of morality, by the way. Once he meets Delmer (an ill-treated orphan boy much like himself) and decides to give him a chance, he realizes some folks are worth fighting for, even if the vast majority of humanity is wretched.

DC: On your Facebook page I see lots of pictures and videos of cuddly animals doing cute things. How many furry critters are running loose around the Henion household?

AH: Monkeys loving puppies, baby hippos, hand-holding otters ... it all warms my noirish little heart. There's a black cat sitting next to me right now waiting for a "man scratch." Another upstairs working on her 18-hour nap. And then there's Parker, our Labradoodle/golden lab mix who's just smart enough to play dumb.

DC: Which writers have influenced you?

AH: I started reading horror early on—middle school through my Army days. Stephen King, Peter Straub, Dean R. Koontz. I read Catcher in the Rye about a half-dozen times as a high school senior—couldn’t get enough of it. The Bell Jar. The Shipping News. These stories really tapped in to my feelings of isolation and dissension. As an adult, I dove headlong into crime and noir, and short stories (both because I wanted to start writing them and because I love the form). Some of my favorite crime series writers are John Sandford, Michael Connelly, James Lee Burke and James W. Hall. Top noir guys are Elmore Leonard and Stark/Westlake. Short story masters: Denis Johnson (his Jesus' Son collection will blow your mind), Tom Franklin, Raymond Carver, Wells Tower and Ottessa Moshfegh. Favorite short story: “The Cavemen in the Hedges” by Stacey Richter.

DC: My early influences were The Hardy Boys and that led straight into Robert B. Parker who enlightened me on Raymond Chandler. About the same time as Chandler (about fifteen-years-old I’d say) I began reading The Nick Adams Stories by Ernest Hemingway which I still turn to today. No less important: Agatha Christie, Ruth Rendell, Edward D. Hoch, James Reasoner, and Wayne D. Dundee.

Andy, Your blog is called Searching for the perfect sentence. Let me hear your top 10 sentences in Devil?

AH:
10) “I kilt another feller and threw him to the beasts.”

9) Billy went to his knees trying to scream but found this impossible without a tongue, the resulting sound like something from a nightmare.

8) For the next hour they conversed as enlightened beings in a barbaric world, the professor discussing his love for biology and psychology, in particular Pavlov and Freud, men who attempted to get at why people did what they did, while Kinsey leaned toward the classics, the fables and—winking here—those no-war scribes, that fella from Dee-troit being his all-time favorite, his characters so unvarnished it was like looking straight through to their souls.

7) She looked at him as if he had just squatted down and shit a hog-beast.

6) She was the most ancient thing he had ever seen, little more than a child-sized bag of wrinkles.

5) “Shit on my hospitality and I’ll use yer fuckin’ brainpan for a spittoon.”

4) Gray stringy hair clung to her skull like a helmet; a mass of skin tags covered her jaws and neck, a live, fluttering scarf.

3) He was a blowhard, this Shakespeare feller, yet somehow she brought his melodramatic drivel to life, reciting the lines with unbridled conviction.

2) The professor’s funk turned to familiar thoughts of vengeance, to the mechanics of killing, an almost comforting state of mind for a man whose world was defined through the sight of a pistol.