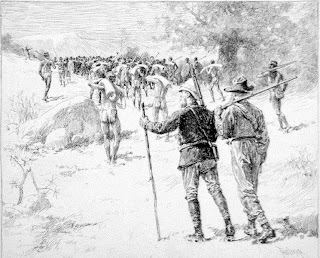 A few of us are reading KING SOLOMON'S MINES (1885) for the first time. We're taking it one chapter a day and just starting Chapter X: The Witch Hunt.

I have to admit my enthusiasm dipped for MINES during the eighth and ninth chapters. I try not to judge a book by 21st century sensibilities but the constant looking down their noses at the “savages” and killing animals for the hell of it doesn’t make for the most enjoyable reading.

However, some fun was had when Allan Quatermain and his troop entered a cave and discovered the corpse of a man who just so happened to be the man whose map they were following. Highly improbable but a nice touch just the same.

My interest has peaked again toward the end of chapter nine with the introduction of "a bald vulture-head witch doctress" who warns King Twala and his people that the white man is no good and shouldn’t be trusted.

What stood out to everyone else? And was I overly critical of these last chapters?

The above drawing by Thure de Thulstrup is of another Quatermain adventure called Maiwa's Revenge: or, The War of the Little Hand.
Posted by David Cranmer at 7:44 PM
Email ThisBlogThis!Share to TwitterShare to FacebookShare to Pinterest
Labels: Book Group, reading, review

The same things bothering you also bothers me. I'm also a little irritated with the "thee" and "thou" stuff he uses to indicate the archaic speech of the natives.

I think having Good stuck wandering around with only half his face shaved, sans britches (Porky Pig style, as Julia would call it), is a fun touch. The epic scope of the landscape is being handled well too.

Rider does an exceptional job with the landscape and Good is an entertaining character. I'm amazed (well maybe not so much) they add a woman for Hollywood productions because the camaraderie between the men is a highlight of this book.

I'm not thrilled with the character's attitudes myself. I try to consider the time it was written and make certain allowances. Doesn't excuse things, mind you, just trying to see from that perspective.

I have no doubt some of today's attitudes will be looked askance when today's classics are read years down the road.

Randy, Maybe I have mentioned the 19th century attitudes too much in my last couple of posts, because the adventure and characters Rider has created are top notch.

Another point you, as a writer, must take into consideration. Writing about characters in a certain time period, you might have to inject attitudes the opposite of your own thoughts. Not everybody thought like that back then, but more than likely the majority did.

They just didn't know any better, raised in an environment that held anyone different as inferior. All it takes to change is to get out and realize we're not all that different.

Very true, Randy. Example: I would toss Cash Laramie into the nearest jail given the chance. His attitude/motivations are very far removed from my own.

Haggard has some great ideas and imagery, but his pacing is way slow for modern readers. At least it seems that way to me. I recently did the "SHE" books

Interesting (and ahead of his time) how he combined his two most famous creations in SHE AND ALLAN.

OK, you're sucking me in. As I'm still living the Kindle-free life, I had to get a hard copy from the library. But I'll be trying to catch up.

I realize when I read a book this old that I don't look to identify with the characters. It's fun when that happens, but it's not a showstopper if it doesn't...Reading this one, I keep thinking of the readers who ate this all up at the time (1885). They were contemporaries of real-life "adventurers" in the Old West, many of whom were game hunters and Indian fighters and in a lawless land.

Looking forward to your thoughts, Evan.

Ron, Folks in '85 had to be loving this high octane adventure. And I can see how it has endured over the last century with new film versions every generation.

Phil weighs in much the same here but Ron's point is a good one. Phil did find the McCarthyish evil witch who picked out people to kill each night really creepy.

The evil witch was a sharp touch and, once again, used in so many adventures since. I can see why some herald it as "The Most Amazing Book Ever Written".

I meant to say I can see why they heralded it as "The Most Amazing Book Ever Written" back then.

Chapters 8 and 9 were slow going for me too --the white god meets the natives routine having been done so much since. Not that there aren't some high points --as Chris notes, Good as a half-shaved Porky Pig with his magic glass eye is fun, as is the witch.

Also, I had to laugh: does Haggard linger just a tad too long on the description of those mountains with their nipples and foothills that suggest a female in repose, and on and on... Imagine 19th century youth digging through KSM, looking for the "good parts, y'know, where he describes the mountains!"

Ha! Yes he does linger a bit long on those breasts/mountains. You really have me chuckling on this end, Rich.