If there was one thing that stood out in this week’s episodes, it was those regurgitation scenes. Ay, dios mio! More than once as Special Agent Dale Cooper (Kyle MacLachlan) is passing from the Black Lodge back to the land of the living.

In what can only be described as a surreal trip for Coop, he gets sucked through an electrical outlet and rides the current until he switches bodies with a lookalike named Dougie Jones. The hapless Dougie was enjoying the company of a lady of the evening, Jade (Nafeesa Williams), who is washing up when Coop arrives and takes Dougie’s place. And there begins possibly the vilest puke scene ever delivered on camera (and if you can point to more disgusting exhibits, I’ll just take your word for it). Dougie is swept away to the Black Lodge, where the one-armed man, Gerard (Al Strobel), explains, “Someone manufactured you,” and bears witness as the doppelgänger disintegrates into nothing more than a little round ball.

Hope you click over here for my review of episodes 3 and 4 of Twin Peaks: The Return. 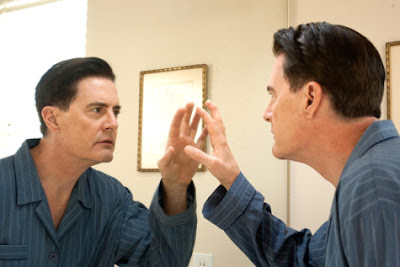