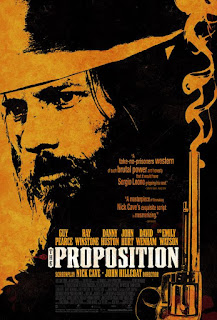 In 1880's Australia, captured outlaw Charlie Burns (Guy Pearce) is given a proposition by Captain Stanley (Ray Winstone): kill Charlie's notorious older brother Arthur (Danny Huston) who had orchestrated the murders of an entire family including a pregnant woman. If Charlie complies within nine days, the Burns youngest brother Mike (Richard Wilson) will, along with him, get full pardons. Charlie locates his brother but hesitates in doing the job. Meanwhile, Stanley is at odds with the town and his superior when it's revealed that he had let Charlie go free. He's ordered to flog Mike a hundred times—a punishment Stanley knows will kill the young man.

THE PROPOSITION is overflowing with remarkable acting talent, though Emily Watson deserves extra mention for her portrayal of Martha, Captain Stanley's wife, a cultured Englishwoman who finds herself in a living nightmare (or as her husband coins it, "Australia. What fresh hell is this?"), determined to retain her principles. The brooding music was composed by Nick Cave and Warren Ellis. Cave also wrote the screenplay. A harrowing, sobering film that becomes stamped on your consciousness long after viewing.

Posted by David Cranmer at 3:28 PM
Email ThisBlogThis!Share to TwitterShare to FacebookShare to Pinterest

A really great one.

I'd have to pick it as one of the finest Westerns of the new century. Top ten for sure.

Thanks for this review, David. I'd never heard of it. But now I'm going to see the film. I thought Guy Pearce was pretty good in L.A. CONFIDENTIAL and those are the kind of roles that probably suit him better.