In September, Dave King wrote me an email saying, “Much thanks for all your past encouragement.” I replied by asking for his address to send a book of poetry his way. At the time, his generous remark didn’t sink in of how he was so close to life’s edge. You see, back on August 15, Dave posted on his blog that he had prostate cancer. Yet he continued putting up poems with his courageous view of the future, and it had me hopeful that more time lay ahead. Sadly, though, Dave’s son Gavin informed his father’s online friends that Dave passed away on October 4.

I recommend you take a minute to read “Why can only the living mourn?” And “How do I prepare for death?” These two recent posts reveal what a brave, compassionate, and caring man Dave King was. And what an extraordinary talent. Good lord, he wrote a poem a day for most of the time I knew him, and on more than one occasion, I had commented along the lines of, “Dave, when are you going to put a book out!” I was in awe of the quality and output.

Like most social networking friends, I can’t remember who came to whose blog first. One day he was there. After reading "I am the man who swallowed the boy" in February 2010, I asked Dave if he would write a poem—in story—for BEAT to a PULP. A few months later, he sent “Collision” and then in 2011 the delightfully titled “Angel Bitch.”

When my nephew died this past June, Dave said in part, “A tragic story that puts my present troubles in perspective.” What a beautiful human being! Doing what class acts of his stature does, put others and their problems above his own.

A further testament to Dave’s courage, I had asked him for another poem for the webzine, and he responded, “It may take me a while to write the poem -- I'm not quite as quick as I was -- have to wait for the next energy burst like a surfer waiting for his wave.” I love this imagery, and how his reply captures the magnificence of a great poet still carrying on with what he loves.

Dave, I never heard your voice, shook your hand, or had an English cup of tea with you. But know I miss you dearly, friend. Thank you for your past encouragement and support. May your poetry continue to soar long after your passing. I know it will with me. And I am rerunning both your BEAT to a PULP contributions this week in your honor. 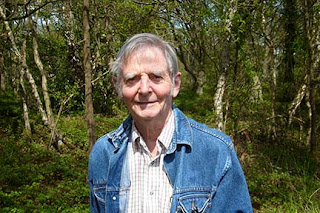 Posted by David Cranmer at 12:02 PM
Email ThisBlogThis!Share to TwitterShare to FacebookShare to Pinterest
Labels: BEAT to a PULP, David King, poetry

David, thanks for this nice tribute to David King, a very considerate person. I'll read his poetry.

I'm very pleased I could introduce you to Dave's poetry.

Interesting man, will check out his poetry! I read a poem once on my way to bootcamp, Around The Corner A Lost Friend, has stayed with me ever since. Life is so fragile. Sis819

Many thanks for this heartfelt tribute to such a kind and creative man.

A Cuban In London, I learned of Dave's passing from your blog. Floored me like I said. And you had a wonderful tribute as well.

yessir it did! We only have today for sure ..

David, I admire how you take the time to find words to express the ineffable. Thanks.

It's tough to lose people you've never met, isn't it? It's happened to me a few times now. Glad you have his poetry to remember his through.

Thanks, Ron. I just can't let such moments go.