Where did life begin for Heath Lowrance?

If we're talking literal, it began in Huntsville Alabama with a smooth-talking ladies man who somehow convinced my (rather naive) mother that he was Chuck Connors. A whirlwind romance, a quickie marriage, and bammo, a kid-- at which point the smooth celebrity look-a-like vanished from the scene and left my mom to do the child-rearing on her own. We migrated to Calhoun, Tennessee, then Michigan, and back and forth for a while, depending on my mother's fortunes and family relations.

If we're talking figurative, it began when I was in my forties and decided I didn't give a damn what anyone thought anymore and decided to stake everything on writing.


What has been the greatest sacrifice? 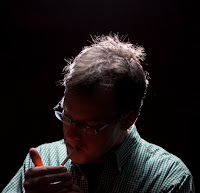 I sacrificed relationships and "career opportunities" that would have led to stability and money. I turned away from any sort of "normal life". But I never missed any of it. By middle-age, I knew that nothing else would work for me but to be dedicated to writing. Any job I took would have to conform to that; if it meant eating ramen noodles and sleeping in the back seat of my car (which it did, for a while) then so be it. Nothing else would do.

My life so far has been an example of Amazing Luck. Despite some intensely rough periods, I'm at a place now where I have a day job that doesn't interfere with my real work, I have a lovely and supportive wife, and a bright and beautiful daughter from a previous marriage. I'm not hungry. I have a roof over my head. And I write. I never had to give it up.


I always liked the way Charles Bukowski referred to mind numbing day labor as soul-sucking jobs. What were a few of your memorable positions?

I've had a LOT of jobs, man. The worst one ever was the one I had the longest, through most of my thirties: working as an office drone. Customer service and all that, taking phone calls from angry customers and dealing with the idiotic managerial hierarchy and soul-destroying corporate minds. Oh, how I hated it. And not surprisingly, I didn't write much during that period. It was awful.

Before that, I worked in a lot of book stores. I worked as a private detective for about a year, which was not nearly as interesting as it sounds. I worked security in the parking lot of a punk club in Detroit. I was even one of those guys who dresses up like a cartoon animal at a theme-pizza- restaurant for kids.

The best job, though, was at Sun Studio in Memphis, where I was a tour guide. I got to listen to great music all day, and talk to people from all over the world. Met a lot of my favorite musicians there and learned a great deal.


Is the ghost of Elvis alive and well at Sun Studio?

Ha... no Elvis sightings while I was there, I'm afraid. But the King will always live on in our hearts, yeah?

I did hang out with Billy Lee Riley, though, and Rufus Thomas, Roscoe Gordon, a few others. I gave a tour of the studio to The Cramps, and that was kind of cool. Probably the highlight of my time there was when the BBC came to do a documentary and filmed Carl Perkins, Jerry Lee Lewis and Scotty Moore (Elvis' guitar player) jamming in the studio. I was the only non-essential personnel in the room. I still get chills thinking about it. I shared a Coke with Carl Perkins and got dissed by Jerry Lee.


What an incredible moment! I gotta ask though, what was up with The Killer that day?

The Killer was getting make-up put on for the cameras. I came up and introduced myself, told him I was a fan, and he sorta looked up at me in this stiff-necked way and said, "'course ya are, son," and then turned away. It was kinda funny, and pretty typical Jerry Lee.


How did you come to write weird westerns?

It was a case of writing what I wanted desperately to read. I loved Robert E. Howard's work, and Joe Lansdale's crazy weird westerns, and really wanted to read something that was all out pulp-inspired western horror. So that's where I went. "That Damned Coyote Hill" was a combination of genres I love, featuring my ideal damaged tough guy protagonist. I wasn't thinking in terms of a series at the time. I honestly thought it would be a one-off. But something about Hawthorne kept inspiring more story ideas and now he and the weird western have taken hold of me.


Can you give us a hint of what Hawthorne is up to next?

Next is "Scarred", the origin story, probably in summer. You'll find out about the woman named Johanna, and Hawthorne's father, and the unspeakably horrible act that led to Hawthorne's current preoccupation with slaughtering evil wherever he finds it. After that, the Cash Laramie/Hawthorne cross-over, which I'm pretty excited about. That will take us approximately halfway through the Hawthorne saga.


It will be interesting to see how you and Ed Grainger are able to cross these two worlds. Hey, make sure Grainger does his fair share of the writing.

Hey, you don't crack the whip on Grainger. But you can be sure it'll be every bit his story as much as mine.


You're right and I shouldn't dump on Ed, he does contribute to a couple of my bills. So, what's it like to write Grainger's Gideon Miles character and what's next? 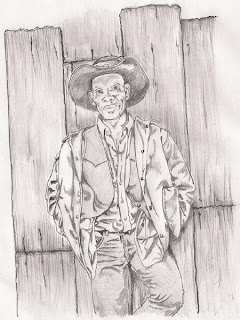 I've really grown attached to Gideon. It's sort of like when a mutual friend introduces you to someone and says, "Hey, you guys should hang out," and you wind up being tight with that person. That's how I feel about Grainger lending me Gideon Miles. And I also think Gideon is sort of inspirational, as a character; whenever I have to decide what course of action he'll take in a story, or what he'll say or think, I start with: what would a decent, strong-minded, level-headed man with a deep understanding of the world do? Because that's what Gideon Miles would do. He's a role model. I'm proud to have contributed to his mythos and help develop his character.

It's a very different proposition from writing Hawthorne, who is a bit of a psychopath, really, and not someone you'd want to emulate.

The next Gideon Miles is a novella called "Gideon Miles and the Axeman of Storyville," which catches up with our hero in his senior years, running a club in New Orleans and coming into conflict with a depraved murderer. Sometime in the near future, I'll return to Gideon in his Old West Marshaling days.

Great interview and very enjoyable. Can't wait for the stories to begin.

Had to read this in two bites. Couldn't wait to get back to finish it. Smart questions to an interviewee telling it straight!

They have begun, Bettie. The links will take you to Heath's books.

Don't know about smart questions, Dave. But thank you, sir.

Icy/Patti, Thank you for stopping by. And the kind words, of course.

Great interview. I'd like to buy both of you a beer.

And I'll take you up on that, Travis. I should be back in Texas before long.