Been back a day from my sojourn to the Lone Star State, and I’m already chipping away at the to-do list. 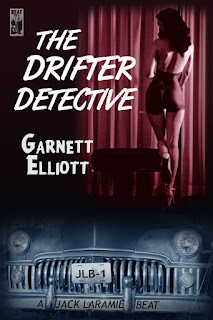 Check 1: The Drifter Detective. In this hardboiled tour-de-force by Garnett Elliott, the family line of Cash Laramie continues with his grandson. A tough-as-nails WWII vet roaming the modern West, Jack Laramie lives out of a horse trailer hitched to the back of a DeSoto in search of P.I. gigs to keep him afloat. Had this story been a 1940s flick, I could picture John Garfield playing the lead.

Check 2: Bad Sanctuary. The fourth Hawthorne Weird Western by Heath Lowrance is just around the corner, and in this book, Heath has shed some light on the mysterious 19th century righter of wrongs. Don’t know what I’m jawing ‘bout? Then here’s “That Damned Coyote Hill,” “The Long Black Train,” and “The Spider Tribe” to catch you up.

Check 3: BEAT to a PULP: Hardboiled 2. After working out some kinks with the cover, the print version of this knockout anthology should be available by next weekend. The eBook is off to a ripe, good start, and we thank everyone who’s supported it. While we’re speaking of Hardboiled 2, you’ve gotta read the one-star ‘review’ from an anathematic creature who says I’m pushing “feminist propaganda.” No kidding, this may be my favorite attack ever. Thanks to a buddy on Twitter, I found out the name of this punk (borrowing my attacker’s lingo), and I will keep an eye on ’im. 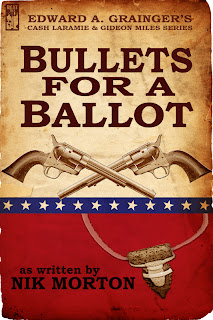 Check 4: Bullets for a Ballot. This Cash Laramie eBook by Nik Morton just got a facelift. It’s been doing ok but not quite as stellar as the others in the series. I’d been thinking that a woman’s breasts prominently displayed on the cover gave the impression that the book is a bodice-ripper, not a Western. Ballot has a lot going for it with Cash as a teenager, an appearance by Miles, and my favorite ending, thus far, to any of the books. Oh, and if that isn’t enough, a character arrives on the scene who seems very familiar to the outlaw marshal—though he can’t quite put his finger on it— and the eye-opener is pure Nik Morton genius in storytelling.

Busy busy busy! It's all good.

John Garfield would make an excellent Jack Laramie. Maybe even a young James Garner (but too young for the 40's).

Oh yeah, your check from Andrea Dworkin just cleared. Keep it up, you subversive you!

You are a dynamo.

Hard to beat Garfield for real screen presence in that kind of role. The Drifter is a great idea for a spinoff.

I agree with your thoughts on the cover change. Your one-star review reminds me of the one Heath Lowrance got, with a reader's complaint that all his characters had "ulterior motives." Carry on, pulp writer.

Garn, JG would have been another solid casting choice. And I should have this done later today.Keep checking your inbox.

Patti, Spinning out of control.

Ron, One of those things that is hard to believe but one-stars, in moderation, help push a book's sales by adding controversy. Still, this guys admits he didn't read Hardboiled 2 and his review should be removed.

Question (and I know I should know this, but, perusing B&N online or Amazon simply isn't the same as say, perusing a bookstore or a library): are most of your anthologies now available as print?

All I have is BTAP Round 1, and I'm looking to acquire others that are in print. Partly for new stuff to read and partly to continue my reputation as a very strange person at work. :D

G.B., All our books are here: http://www.beattoapulp.com/books.htm Only have a few in print. Mostly eBooks.