This past Wednesday, my charmers and I joined the swarm hopping the 449/194 Amtrak train out of Syracuse going to Chicago. There we switched trains and headed to Texas to visit my mom.

Some Amtrak facts: every day, more than 300 trains roar across the country at speeds up to 150 mph, and, with 21,200 miles of track, thousands of passengers can go to 46 states and three Canadian provinces. Train travel is booming again with 30 million riding the rails each year. (Thank you, Wikipedia.) 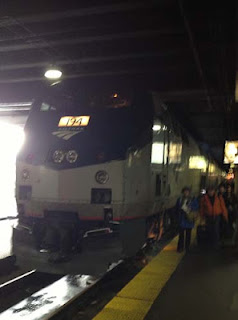 We traveled 1,159 miles and covered eight states. A prime opportunity to see and meet the folks making connections … an eclectic mix of America on the go. College kids. Single moms. Mentally challenged. Elderly. Alcoholics. Photographers. Itchy chain-smokers. Actors. Working class heroes. Little-known pulp writers. But that’s a book or, at the very least, a post for another time.

It’s the American landscape that captured my imagination.

The countryside flickered by in a treasure trove of still-lifes -- countryside once shaped by Norman Rockwell paintings now crumbling into a beauty of deliberate abandon.

I snapped more than 1000 shots in all, creating a pictorial record of our journey that would otherwise never have been remembered. Along the steel rails, five sights/points of interest appeared more in my viewfinder than any other:

I would love to travel by train. The only train trip I've taken -- outside of airport shuttles and the Seattle Monorail and Chicago L, etc. -- is a train from Colon, Panama, across the country to Panama City. A trip of just a little over an hour, if I recall. I'm envious, my friend.

I've never been on a train myself. Been to pick folks up a few times though. I always thought it would be an interesting way to travel.

Nice pics by the way.

My dad was very big on trains, which was probably due to my late grandfather working for the H.,N.H.& N.Y railroad.

Even used to a lot of traveling by train when he was in Jamaica during the summer, which was very hardcore traveling.

In the last decade or so of his life, he belong to railroad enthusiast club.

Never really got into it myself, but its definitely nice to see that train travel is picking up again.

Chris, Now I'm plotting more cross country adventures. Maybe from Maine to Colorado. Of course, it is expensive to do it right and have a sleeper car. Maybe another couple of years for the next journey.

Thanks, Randy. If you can swing it, get on the train, sir.

GB, Railroad enthusiast club!? Didn't know about that. Say no more. Sounds like your dad and I could have killed sometime jawing about these steel beasts.

The train looks like a wonderful way to see a large and varied land.

I've only traveled by train once but very much enjoyed it. Lana and I need to do this as well. She would get a kick out of it as a photographer for sure

I've done the Greyhound but never the train. it seems like an awesome thing to do.

That it is, Leah. Our kind of experience.

Charles, One photographer kept jumping off at all the stops and snapping pics every chance he got. Yes, Lana would get a slew of inspiration for her paintings.

Chudney, Having your own sleeper car trumps the bus tour. Plus trains have observation cars for the coach riders. You should give it a try with your kids. They will love it.

Those are some beautiful pics. I've only done one train trip in my life––Los Angeles to Las Vegas back in the '90s––but I have to agree there is something special about riding the rails. It's nostalgic yet modern. Fast yet slow. Perhaps it's the perfect balance for writers with an urge to wander, a way to escape while still knowing that home is just a little ways further down the line.

It all came alive for me with this:-

The countryside flickered by in a treasure trove of still-lifes -- countryside once shaped by Norman Rockwell paintings now crumbling into a beauty of deliberate abandon.