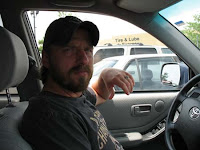 Frank Bill is the first but by no means the last short story writer initially supported by BEAT to a PULP who has landed a 2-book deal with a major publisher. Forbes.com just broke a story on Frank’s newly minted success, along with his mystery-writing agent Stacia Decker.

“Acting Out” is an 18,000 word novella written by Frank and featured in BEAT to a PULP: Round One. We snagged it long before Forbes Magazine and the world found Frank. Lord knows, we could never afford him now! The following is an interview with Frank Bill and Elaine Ash about the process that went into the acquisition and editing of “Acting Out,” plus an outline of Frank’s process from online short story writer to the majors.


David Cranmer: Tell us the story of how BTAP found “Acting Out”?

Frank Bill: Go back months and months before I’d gotten an agent. Ms Ash, you’d decided to have a workshop for writers who’d written a story and couldn’t get it right, and offered to help fine tune the struggling writer’s writing. I had my first novel, Acting Out, it was a transgressive story. I told you about it. You wanted to see it for the challenge, I emailed it to you and apparently it grabbed your attention. And after you read it, you wanted to see my query letter. As you stated, it was the worst letter you’d ever read.

Elaine Ash: As I remember Frank, you had Acting Out gathering dust in a drawer. You had sent it out to agents and there hadn’t been a bite. You had actually concluded that the novel was too “edgy” and you’d toned yourself down in your second novel. I hadn’t seen Acting Out, but I was suspicious about it being too edgy. I didn’t buy that. So as I recall, although it was too long, as a novel, to qualify for the writing challenge I was running at the time, I asked to see it. As soon as I read it, I contacted David and told him it had some great stuff in there and would make a great novella for the print anthology that was a gleam in his eye, at the time.

FB: I’d sent Acting Out to like 50 agents. No one wanted it. I’d let the hard copy sit in my closet while the other went from one hard drive to the next for about 5 or 6 years, I actually finished it sometime in 2003. Over that time my writing changed quite a bit. I found my niche. Forgot about it and then my stories started getting accepted. And I worked with you and David, created a long lasting friendship. Writing is a long process just like life. I’ve learned a lot and still have a lot more to learn.

FB: I wrote it because I wanted to write a novel that hit you like the early work of Chuck Palahniuk and Jason Starr. They were early influences. But then, so was Larry Brown. Only, I didn’t think I could write about what I knew the way Larry did, and make things interesting. I thought a writer had to do tons of research. And I did. I wrote about an accountant. I knew nothing about accounting. But I also wrote about all these crazy ideas my buddy and I used to think up on night shift at our factory job. Just guy humor with elements of crime. But what I really did was find my way. Writing that novel lead to a second novel about things I didn’t research and a third that required a small bit of research. And my short stories started to blossom. It didn’t happen overnight. What I’ve learned, when you find your voice you’ll draw from everything you know in life, past and present. People and places, feelings tapped and untapped. Writing is a culmination of knowledge known and knowledge you’ve yet to learn. You gotta read, you gotta write and you gotta interact with other people. Sometimes just watching. Never judging, just paying attention to details. 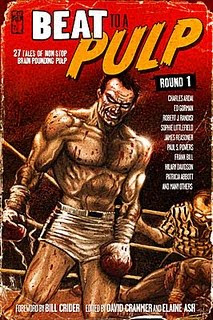 EA: It wasn’t easy. First, I had to read through and make some very tough decisions about which subplots were going to get excised and even some characters that were going to go. The main character’s girlfriend, who played a medium-sized role, ended up going. Her appearance in the final scene was taken over by a woman where the protagonist worked. Even though the story was cut majorly, Frank’s humor and verve was retained in the story. His fresh voice, and the restructured plot which I edited to move fast and furious, makes it hard to put down. I put months of work into the piece. Frank, bless him, is one of the easiest writers to work with in the world. He just said, “I trust you,” and let me do my thing. An editor’s dream.


DC: Tell us the latest regarding your 2-book deal with Fararr, Straus, Giroux, and a little bit about how you made the leap from webzine writer to book-deal author.

FB: I just signed my contracts for the two book deal with FSG. They’ve published Flannery O’Connor, Joan Didion, Johnathan Franzen and Michael Cunningham, to name a few. I’m currently working on edits with my editor for the first book.

A good Editor gets you and your body of work. They understand how to make things stronger, not by changing the story but by asking questions you might've missed. The extra detail to character, the why and how the character functions in his/her environment and how that environment makes he/she function. Basically a good Editor makes an unbelievable story believable. That's their job. That's why they're editors. And every writer needs an editor. I enjoy getting input. It pushes my work to a stronger level. I want to write prose that when you pick up my book, they clutch your hands and make your eyes bleed. I want it to be an experience that makes you say, dammit why doesn't everyone write like this. And I'm getting close to doing that, I think, but I couldn't have done it without my agent and my editor(s) we're not there yet, but boy are we close.


DC: Can you detail the process of going from webzine writer to contracting with a major publisher?

FB: The leap was more about me believing in my work and making connections with other like- minded writers and editors. Long story short, Lady D at Thuglit liked my short "Old Testament Wisdom." But it needed some editing. She helped me edit and fine tune it. Published it. Then Neil Smith over at Plots With Guns liked my short "Rough Company." He helped me edit it and pointed some things out. After that, you and Elaine had gotten a few of my polished shorts. I knew I had to write lean and to the point. And I did. Got your all’s attention. BEAT to a PULP did two of my shorts back to back. A first.

Then I began a third novel. Got invited to read with Neil Smith, Scott Phillips and Jed Ayres in St. Louis at their first Noir at the Bar. Neil and Scott recommended an agent. I queried her with some of my material, she dug it. I finished my next novel. Went to the 09’ B-Con in Indy, met my agent, Stacia, hung out with her, Neil Smith, Greg Bardsley, Kieran Shea, Jed, John Rector, Dan O’Shea, Victor Gischler and Joelle Charbonneau.

After that, Stacia and I went through a few rounds of edits. Brainstormed some ideas. She sent the manuscript out and someone was interested in it.

DC: There you have it. Thank you, both.
Posted by David Cranmer at 1:35 PM
Email ThisBlogThis!Share to TwitterShare to FacebookShare to Pinterest
Labels: anthology, BTAP, interview

A great story. Glad to hear of it and congrats to Frank Bill, the man with two first names.

Glad to see an old, great friend getting recognized for his work! Congrats Frankie!

Cracking interview. Frank, of course, is a cracking writer. Is there a Bill Frank in the world?

Charles, That is the perfect author's name.

Jejzstotts, Thanks for stopping by. Btw Jejzstotts is very hard to type at four in the am which it is here.

Paul, If there is, Frank & Bill should do a collaboration. Just for the sake of the book's cover.

What an uplifting saga of struggle and success. Love it! Cheers.

Yes, a great interview and insight on both Frank and Elaine’s work.

Frank is a cracking writer and it is great to read about his success.

Congrats also to Elaine for being such a fine editor.

Thanks for the comments, everybody. You're the best, I love the people who read BTAP and cement the world of on-line fiction.
Regards,
Elaine

Great story! Congrats to both Frank and Elaine. My favorite quote..."when you find your voice you’ll draw from everything you know in life, past and present." Agreed.