From Fan to Writer

I arrived back from the hills of Pennsylvania to find several books, DVDs and magazines waiting for me at home. The first treasure I dug into was the debut issue of NEEDLE: A Magazine Of Noir. Many glowing reviews have already been posted around the net and I will bring them altogether by saying this: NEEDLE is the new pulse of crime fiction. Period.

I had read about half the magazine (and written the above passage) when I received an unexpected and welcomed request from editor Steve Weddle to submit a piece for the next issue. Damn if I didn't jump at the chance quickly before he changed his mind! And my luck didn't stop there as it just so happened that I had a story waiting in the wings called "The Sins of Maynard Shipley."

Here's the super-looking cover for the Summer 2010 issue. 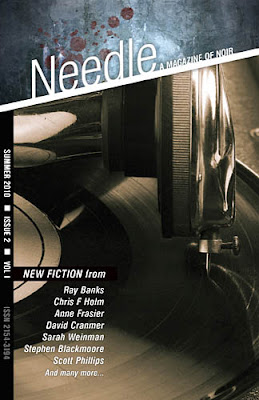 Congrats on the invitation!

Naomi, Oh, and he breaks the majority of the seven deadly.

That he does, David. Great story, great venue. Congrats.

Looking forward to THAT! Brilliant cover!

I agree with you about the cover. My first thought was how stunning it is an d my second that if the contents are half as good it will be a wow. Congrats on your own good luck - richly deserved.

Sweet! And congrats! Can't wait to read the story.

Chris, Thanks for taking a look.

Lee, Paul,& David, Much thanks.

David, The talented Mr. John Hornor Jacobs did the cover.

Sandra, You slipped in on me there. And thank you. I hope everyone doesn't forget to grab a copy of the debut issue that features your marvelous "Big Girls Don't Cry."

Congrats. You deserve all the success you get David. Add another book to my library. Can't wait!

Congratulations! It's a great-looking cover, all right, and I'm sure your story will be a dandy.

Looks great! How do I order a copy?

Bill, Steve and his team have really done a top job with NEEDLE.

E, Thanks. A link will be available at the NEEDLE website which is in my blogroll to the left.

Glad you're aboard, sir.

Congrats- Turns out the first issue wasn't a fluke. The Needle-pushers actually know what they're doing!

I hope everyone supports them to keep this ship sailing. We are in dire need of quality outlets for both readers to enjoy and a place for writers to hang their hats.

This is wonderful news, David! Congratulations. I'm thoroughly enjoying Issue #1 and I am looking forward to #2 already ~ especially your story!

Kathleen, Thank you and they really did a top job with #1 didn't they?

They certainly did! I'm still enjoying it; when time allows, I grab another story. They are like potato chips; you can't stop at one!