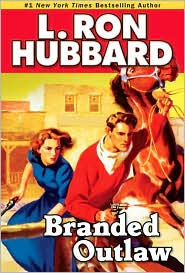 "Branded Outlaw" was originally published in the October 1938 issue of Five-Novels Monthly. It was written by L. Ron Hubbard at the height of the golden age of pulps and as you can guess by the cover is a western.

When prodigal son Lee Weston returns home to the Pecos Valley, he finds his father has been murdered and the family homestead burned to the ground. Suspecting local money-man Harvey Dodge, Lee rides to the Dodge ranch to avenge his father. Along the way, he is wounded in a shootout and then miraculously nursed back to health by Dodge's daughter Ellen. Ellen tries to persuade Lee her father is innocent but Lee is determined to see justice is done. Meanwhile, after Dodge is left for dead by a partner, the attempted murder is pinned on Lee. Now Lee is on the run, desperate to clear his name and convince Ellen, who he's fallen in love with, that he is blameless.

The blurb on this novel claims "Hubbard appears to have possessed the flair of greats Louis L’Amour and Zane Grey", (The Sanford Herald). That may be a bit of a stretch, but since this is the only L. Ron Hubbard novel I’ve read, I'll give them the benefit of the doubt. He certainly was a competent writer, and though there aren't many surprises for the western fan, BRANDED OUTLAW is an entertaining tale.

This is a slim novel of only eighty pages, beautifully packaged with a handy-dandy glossary of western terms and a biography of Hubbard.

It’s piqued my interest in reading more by Hubbard who is primarily known today as the founder of Scientology.

Click over to Pattinase for more Friday's Forgotten Books.
Posted by David Cranmer at 1:10 AM
Email ThisBlogThis!Share to TwitterShare to FacebookShare to Pinterest
Labels: forgotten books, pulp, western

Indeed, that is a handsome cover! I've never read Hubbard before either, but if I came across that cover in a store I'd be tempted to pick it up.

Out of curiosity, are there any surprising terms in the glossary? And choice phrases that jump out at you?

Cullen, "Court to paid", "gumbo", "hell on skates", "jerk", "neck-reined", and "pitching hole" are a few choice words. The bio was also informative considering whenever we read of the later Hubbard it's always rather unflattering. Here he is just another struggling pulp writer working for a penny a word.

I remember reading a few of Hubbard's Battlefield Earth books. The scientology thing has soured him to me.

I saw a doc about L Ron years ago and he seemed like a very entertaining flim-flam man.

I have never read a L.Ron Hubbard book and, until today, even with such a bright cover, I would not have given this book a second glance for the obvious reason.
However, as David points out, this was written before he was 'famous' and David has produced a fair critique on that basis.

Archavist, I understand and feel the same way. Historically, I was interested in what kind of writer he was.

Paul, Without a doubt a man that spends several years living offshore to beat taxes and announces he's going to create a religion is full of it. The young writer though I found fascinating... Then again, it's how you end your life that matters.

Ray, Thanks. Funny, I looked at this book in Barnes and Noble and my wife gave me a sideways glance. "Research" I assured her.

I've not read this one. Battlefield: Earth is a decent read(God forbid if you've ever seen the Travolta movie).

Randy, I never saw the movie. I remember seeing clips of Travolta in that ridiculous costume and then reviews hailed it as one of the worst films of all time. I just scanned the net for takes on the book and it appears the novel received mixed reviews when first published. There are rumors that the Church of Scientology purchased copies of Battlefield: Earth to make it a New York Times Best Seller.

It's funny to think of him morphing into the leader of La-la land.

How timely! I'm actually reading Hubbard's Battlefield Earth at the moment. It's 430k words, but I've loved it.

In fact, I can't believe I'm just now coming across it. I keep thinking, 'surely some friend should have recommended this to me?'

Hubbard wrote it (I think) to celebrate being a writer for 50 years. It's a fun, action-packed read of the year 3000.

Incidentally, I haven't seen the movie, but I've heard it was dreadful and nothing like the book.

I'm with Gary on this one: hard to read Hubbard knowing who he became. Perhaps, if I'm hard up for a read some day--unlikely--I'll pick up this western. However, since my time is finite, I'll follow your review comment: "He certainly was a competent writer, and though there aren't many surprises for the western fan, BRANDED OUTLAW is an entertaining tale." No surprises = no real reason to read. Thanks, David.

L. Ron Hubbard did pulp.......never would have thought that. cool

The most famous rumor about Hubbard is that he realized the easiest way for a pulp writer to make a killing was to create a religion, so he did so. And went from being a fitfully interesting but frequently sloppy writer to something else again. I'm unwilling to give the Church's publishing arm money for his work, but then, I don't like most of what they've offered among his work ("Fear" and "Typewriter in the Sky" were for years the only works of his that were independently in print, and apparently in those cases with some justice.)

D.A., According to Wikipedia, both The Magazine of Fantasy & Science Fiction and Neil Gaiman have high praise for Battlefield Earth.

Scott, If it hadn’t been sitting in the bookstore within reach, I wouldn’t have gone out of my way for it. For me, the lexicon he uses circa 1938 is interesting enough that I may purchase a second.

Josh, Everyone starts somewhere. I kinda wished he had stayed with the pulps honing his craft but obviously religion paid better in his case.

Todd, I agree that buying these books is putting money into the church and would be obviously objectionable to many people. I will give them credit, they did it right in terms of packaging. It would be nice if other pulp authors like Norbert Davis, Roger Torrey, etc., could get the same treatment. Maybe they will through Hard Case at some point.

Chris, Thanks, I’m glad you enjoyed the review and good to know that I’m improving.

Battlefield earth was, I'm sure, ten books in all - I think they call it a dekology or something like that.

That was a good review David, thanks. I can't see me ever buying any of his books, but there is a library a few blocks away. I enjoy other authors from that period for the differences in phrasing and word usage as much as for the stories themselves.

I tried to read a bit of a Scientology book, but couldn't get past the first 200 words or so.
I hadn't realized he'd tried his hand at a western. Perhaps this may rehab him a wee bit for me.

Archavist, Yeah this was massive. According to Wikipedia: Written in the style of the pulp fiction era (during which Hubbard began his writing career), the novel is a massive work (over 750 pages in hardcover, 1000+ in paperback).

Reb, You're right that that would be the best way to read Hubbard and I always believe there's something to learn from these old pulps. Besides sci-fi and westerns he also wrote fantasy, mystery, sea and air adventures.

Leah, Thanks for stopping by and I'm not sure this book would change your mind on Hubbard as an author. For golden age of pulp nerds like myself it's a must but others may be disappointed.

Stranger in a Strange land was a sensation in my school! We all lived that book for months.
Good post! Aloha-

I believe Robert A. Heinlein wrote Stranger in a Strange land. Did Hubbard write a novel with the same title?

No, but various people tried to find cult guidance in STRANGER, too, most perniciously the Manson Family.

I will have to read more about the cult surrounding STRANGER. Scary and captivating all at once regarding these individuals associated with, as Patti put it, La-la land.

He didn't only try a western, he wrote them by the dozen. The scientologists have been publishing them in a series. One of them sent me a copy of one book and I think it was something like sixth in the series. Hubbard also wrote lots of exotic adventures. He claimed he'd travelled all over the world, but biographers (independent, that is) have claimed that there was no truth in Hubbard's stories.

Juri, I'm not crazy about the idea of placing money in the church's hands but I may try a couple other Hubbard pulps to get a better informed opinion of his writing.

I don't think the link will work for long, so grab it while you can.