The Book Review Club: High Profile by Robert B. Parker 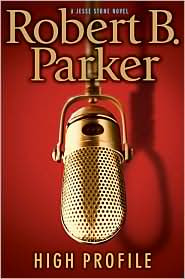 Controversial talk-show host Walton Weeks is found dead, hanging from a tree on the outskirts of Paradise, Massachusetts. The body of his pregnant mistress is discovered in an alleyway soon after. Police Chief Jesse Stone has his hands full as the national media descends on his little ‘sleepy’ town for the headline of the year.

To add to an already hectic scene, Stone’s reporter ex-wife, Jenn, shows up in hopes of landing the murder scoop, and she further complicates the situation by claiming she’s been raped. Stone, who’s still hung-up on his ex, puts his budding relationship with Sunny Randall to the test when he asks Randall to stay with Jenn to provide security while he solves the murders (btw, if you’re new to the Jesse Stone series, it may be of interest to note at this point that the Paradise police chief is an alcoholic who sees a psychiatrist on a regular basis).

As Stone investigates, he peels away the layers of undisclosed and tangled relationships involving three former wives, each of whom have a stake in the host’s media empire, all while trying to put the pieces of his own personal life in order.

This book was an enjoyable read, and the interplay between the characters is well-developed, especially Stone’s conflicted ties to Sunny and Jenn—the reader can only speculate why Stone doesn’t kick his ex’s cheating a** to the curb and take up with the much more deserving Ms. Randall.

If I had to name just one gripe with the Jesse Stone series, and this is one that shares a common thread for all Parker franchises, it would be the endless psychiatric discussions. Heck, even Sunny Randall is seeing a shrink ... Susan Silverman who is Spenser’s longtime girlfriend. Talk about obsessive!

In short, High Profile is a good place for first time readers to jump on the Parker train or for old fans looking to return.

Thanks to Barrie Summy for inviting me to participate in The Book Review Club. For more reviews, check Barrie's blog for a complete round-up.
Posted by David Cranmer at 1:01 AM
Email ThisBlogThis!Share to TwitterShare to FacebookShare to Pinterest
Labels: Book Review Club, review

Oooh. This does sound good, David. And I'm on a mystery jag! Thanks for joining in.

I'm maybe halfway through the Spenser books, and I've read only one Sunny Randall. Jesse Stone will have to wait a bit -- except for those great tv movies with Tom Selleck, I don't like to miss those.

Barrie, Thanks for asking me.

Corey, The Selleck movies are exceptional. I've heard there's a new one in March and he's already filming another one for later in the year.

To date, I've only read one Spenser novel, the first, and there's nary a shrink in sight. I keep hearing good things about the Stone books and knew enough to recognize Randall as well. If time doesn't allow me to read these stories, I'm certainly going to watch the movies.

I've read some of his Spencer novels and enjoyed them but haven't read any of the Stone novels so far.

Who needs a shrink when they can write? :)

Scott, This is probably wrong to say but I enjoy the movies more than the books and the books are superb. Tom Selleck is an underrated actor who really delivers the goods on this one.

Charles, I would start with Night Passage and read them chronologically.

Kathy, Thanks for stopping and I am going to zip over and check out your site.

I've never read the Spenser novels. Which ones are the best?

This intrigues me:
"ex-wife, Jenn,"

How can I NOT read it?!
/Jennifer, short for Jenn!

Jenn, Jesse has his hands full with this Jenn.

Sounds like a fascinating, tangled read. I'm always a little in awe of authors who can weave so many threads together. My brain doesn't work like that...

I, too, would like to salute the greatness of Tom Selleck.

I've still never read any of Robert Parker's books yet. How is the Chandler novel he completed, "Poodle Springs"?

D.A., Thanks for stopping by and I will check out your blog tomorrow when I get a chance. I'm glad you liked the Parker review.

Cullen, I thought "Poodle Springs" was one of the best. From Chandler to Parker was a seamless flow.

Wow, talk about tangled relationships! I’m amazed the reader can follow so many interwoven plot strings, although you make it sound clear. Thanks for the review.

Sarah, Thanks for stopping by and I'm glad you enjoyed the review. Now, if I can just write something as good!