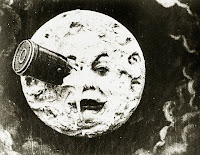 A Trip to the Moon is a French black and white science fiction film loosely based on the popular novels, From the Earth to the Moon by Jules Verne and The First Men in the Moon by H. G. Wells.

Written and directed by Georges Méliès, assisted by his brother Gaston, A Trip to the Moon is the first science fiction film that utilized innovative animation and special effects. The film runs 14 minutes if projected at 16 frames per second (the standard frame rate when the film was made). Extremely popular at the time of its release, A Trip to the Moon remains the best-known of the hundreds of Méliès's fantasy films. [Source: Wikipedia]

a classic movie and a piece of cinemtaic history for sure.

Charles, The imagination for the time is quite creative.

Josh, There's a DVD collection by Georges Méliès that just came out that I may have to buy. Amazingly, he started making movies in 1896!

One of my grandfathers was adamant about the film industry making great advances in the future. He used to take my mother and her brothers to the silent films every Saturday from 1915 to 1925 or so.

This was a very interesting movie for it's time. Thanks for sharing as this was my first view.

Interesting tidbit about this.

A spoof was done on this movie by the band The Smashing Pumpkins for their song "Tonight".

Completely done in black and white, it incorporated many parts of the movie into the video.

It's quite entertaining for a music video.

Georgie B, I forgot about this video. I will add the YouTube link. Thanks.