I haven’t posted much about my hometown because, unfortunately, I’m rarely there. For the past fifteen years, I’ve worked all over, from Washington DC and North Carolina to Belize and Cameroon, and now Louisiana. I’m a gypsy at heart so I enjoy the traveling and wouldn’t change a thing. But as soon as I step back in Freeville -- I’m home.

I’m not the only famous (all right, enough with the chuckling!) resident who feels this way about Freeville...

Many of you may already know the name Amy Dickinson; she took over the Ann Landers’s advice column for the Chicago Tribune with “Ask Amy” in 2003. If that isn’t enough to make her Freeville’s most famous resident, her multi-million book deal with Hyperion will certainly give her the top spot! The Mighty Queens of Freeville: A Mother, A Daughter, and the Town that Raised Them, her first of a two book contract, will be out in February.

My sister, Meta, and Amy were both from Dryden high school’s Class of ’77, though Amy might not remember Meta’s kid brother from down the street (I was seven years old at the time). Even so, I can’t wait for the release of Amy Dickinson’s book. It's gotten a lot of early positive reviews and I’m looking forward to a fresh perspective on our little hometown as seen through the eyes of one of Freeville’s “Mighty Queens.” 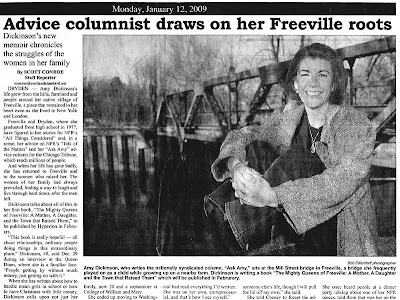 From the Cortland Standard, Monday, January 12, 2009.
I used to ride my bike over that bridge all the time as a teen, going into town from my house.

For more MTM posts, check out Travis Erwin's site.
Posted by David Cranmer at 1:01 AM
Email ThisBlogThis!Share to TwitterShare to FacebookShare to Pinterest
Labels: My Town Monday

Very interesting post. I'm sure Amy remembers you! I'd like to read her book. Maybe you're in it!

I'll have to check this one out.

Barrie, I sincerely doubt it but there's a chance she remembers my sister from school.

Travis, Good to have you back in the swing of things. Hope things are going well.

David, I agree with Barrie. You never know who remembers you from the past. Surprises have been known to occur. Great post.

My daughter's over in New York at the moment on holiday. Lucky girl, I've never been to the states myself but am planning a big touring holiday. Anyway Clair, that's my wonderful daughter, says it's freezing cold but absolutely wonderful. I'll mention the famous David Cramer to her but I think she's more interested in seeing the sights. Yesterday she laid a flower from me on the John Lennon memorial - isn't that lovely.

I remember her column. Interesting that she's now writing books.

Archavist, I hope Clair is having a fantastic trip. I know how big of a Beatles fan you are, so that's pretty cool she visited the site.

Junosmom, You can find her column online and she's still writing it.

I've never lived in a small town but it must be nice to have such a sense of coming home to such an intimate place.

Patti, It is a great feeling and the solitude of the country, for a writer, can't be beat.

Tis a delightful name for a town!

Interesting post. It is great to have a place to go back to like that. Sadly my small town grew into a small very busy city.

Jenn, You just gave me an idea. I'm sure there are quite a few Freevilles with Mill and Main street names. That may be an interesting future post.

Reb, We do have some urban sprawl from Ithaca but so far, so good.

You are famous to us! And I enjoyed your post about your town and its other famous resident.