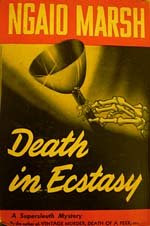 Death in Ecstasy gets off to a running start when journalist Nigel Bathgate, a parallel to Sherlock's Watson, is bored enough to stop by the controversial church, House of the Sacred Flame.

She raised the cup to her lips. Her head tipped back and back until the last drop must have been drained. Suddenly she gasped violently. She slewed half round as if to question the priest. Her hands shot outwards as though she offered him the cup. Then they parted inconsequentially. The cup flashed as it dropped to the floor. Her face twisted into an appalling grimace. Her body twitched violently. She pitched forward like an enormous doll, jerked twice and then was still.

This is the catalyst that brings Bathgate's friend Chief Detective-Inspector Roderick Alleyn of New Scotland Yard on the scene. Alleyn is a gentlemanly detective in the vein of Lord Peter Wimsey. He’s not as eccentric as some of the sophisticated detectives of the golden age but that’s what gives him a modern edge. With his mini pre-CSI team in tow, Detective-Inspector Fox, his assistant; Detective-Sergeant Bailey, the fingerprint expert and Dr. Curtis, the surgeon, Alleyn is determined to solve the case of who killed Cara Quayne.

The question in Ecstasy is classic: Who had access to the communion that killed the victim and what’s the motive? It’s immediately clear everybody had a motive and ability. If you don’t enjoy the classic set-ups, then you might not care for this story. But I like the old style and I thought the way Marsh devoted a chapter to each potential murderer and offered plenty of clues and red herrings was entertaining. 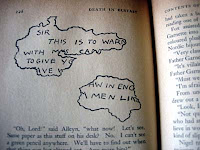 Early crime stories like Ecstasy often included a list of the characters involved in the case at the beginning. This roll call is a blessing for someone like me who has never been the most adept at remembering dozens of names and their occupations and connections. Another nice touch is a drawing of the murder scene and a quaint illustration of two scraps of burnt paper that Detective-Inspector Fox fished out from an ash tray with tweezers. These little touches were probably unnecessary but helped to spice up the storytelling.

I spotted this 1943 edition of Death in Ecstasy in a used bookstore. The dust cover is in tatters and will crumble if I’m not careful. A message on the back explains: This book is printed on thinner paper in accordance with a ruling of the War Production Board and the wartime need to conserve materials and manpower. I will probably find a archival sleeve to store it in to preserve any farther damage.

Ngaio Marsh is regarded as one the four original "Queens of Crime" along with Agatha Christie, Margery Allingham and Dorothy L. Sayers. These talented writers ruled crime fiction beginning in the 1920s. More information on Marsh can be found here and here.

Marsh is one of my favorite writers. I read every book of hers although she seems to have fallen a bit out of favor. This is the place I came from: Marsh, Tey, Sayers, Millar, Highsmith, Hughes. Great dames, all.

Interestingly, as someone who entered crime fiction as a fan of hard-boiled and noir material, I realize I am coming around to an appreciation of the classic mystery story. This one seems right up my alley. Thanks for yet another title to add to The List. And I appreciate the historical reference as well. It's no wonder classic first editions of famous books or comic books are so rare. It's Hitler's fault!

Patti, I recently read an old Ellery Queen Mystery Magazine with a Highsmith yarn that was psychologically brilliant. That reminds me I need to read through the Ripley novels again.

Scott, Yeah, old Adolf was more of an art collector... I started out myself with Chandler and have moved to Agatha's side of the street recently. However, hard-boiled will always be my preference.

I've not read it. The title makes me think of a Laurell K. Hamilton book. Maybe this is where she got some of her ideas.

I'm coming at things from the other direction. I've always loved the classic crime -christie, sayers and Conan Doyle and only now I'm discovering the pulp and hardboiled stuff. I think each have their strengths.

I'm with the Archavist more or less.

Charles, Since you're not a big fan of these old 'the butler did it' plots, you may wanna steer clear of this one. You had me looking up Laurell K. Hamilton. She seems like a very interesting author.

Archavist/Patti, I agree each have their strengths and it's interesting to me how people discover a genre and then radiate out. I also enjoy stories that are sucessful in blending genres, like Deadwood and Firefly.

Weird that you posted about Ngaio Marsh. I was reading yesterday about the mystery genre in the 1920s.

Barrie, I see why they call it the golden age. Christie is my favorite but I have really enjoyed recent stories I've read by Margery Allingham and now Marsh. Incredible talents.

you know man, i agree totally. With all the media coverage going on, its impossible to not here some terrible. I don't know if all this media is a good thing, or bad thing.

I used to read a lot of crime dramas including Agatha Christie, and my favourites were always stories of which person had the greatest motive to kill. Thanks for another great post, David.

Barbara, yeah I'm a sucker for these mysteries also. It must be the English in me:)