Wanderer above the Sea of Fog 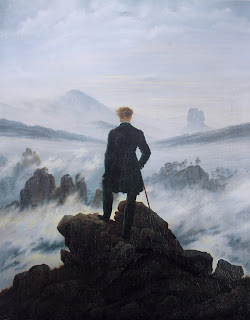 “Wanderer above the Sea of Fog" (c. 1818) by Caspar David Friedrich. One of my favorite oil paintings. From Wikipedia: “He looks down on an almost impenetrable sea of fog in the midst of a rocky landscape - a metaphor for life as an ominous journey into the unknown.” This iconic image is one of the inspirations for the latest series of poems that I’ve written, that will be appearing at the Close to The Bone webzine October 31st.

Posted by David Cranmer at 9:08 AM 4 comments:
Email ThisBlogThis!Share to TwitterShare to FacebookShare to Pinterest
Labels: painting, poetry

Close to The Bone 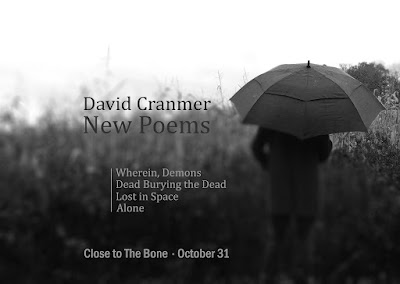 Posted by David Cranmer at 3:25 PM No comments:
Email ThisBlogThis!Share to TwitterShare to FacebookShare to Pinterest
Labels: Close to The Bone, poetry

A wind shear knocked out our power, a week ago, and it was fully restored today. So a few catch-up links of what was happening while I was away include my article Modern Western Films Written Better Than Ever at LitReactor. And remember I told you I had more to say about MAN OF THE WEST? Well, here I am at the Western Fictioneers with an appreciation for the Gary Cooper film along with a new poem. Lastly, speaking of poems, Close to The Bone webzine announced that they will be featuring four of my poems in what they are calling the 4.4. Very honored to say the least.

Okay, now I will zip around your blogs and see what I've been missing.

Western Fictioneers: NEW RELEASE: UNDER WESTERN STARS: If short stories are my first and best love, then short westerns are that magical summer affair that seems all too rare and fleeting. Firmly...
Posted by David Cranmer at 9:24 AM
Email ThisBlogThis!Share to TwitterShare to FacebookShare to Pinterest


I write to music, as I suspect many others do, too, and perhaps not just writers but anybody at an office, garage, warehouse, etc. where the drudgery of the day needs a little relief. Recently classical music has taken over for my standard go-to jazz or rock categories. In particular, my charmer introduced me to Erik Satie's "Gnossienne no. 1" which is a moody, gorgeous composition. This particular piece plays as the soundtrack in my mind when I think of the gothic poem "The Long Return" that I wrote about a missing person.

What is your preferred musical inspiration while the job is getting done?

Posted by David Cranmer at 10:58 AM No comments:
Email ThisBlogThis!Share to TwitterShare to FacebookShare to Pinterest
Labels: classical, inspiration, music, writing

I saw MAN OF THE WEST (1958) starring Gary Cooper for the first time, unbelievably, last week. An extraordinary Anthony Mann film based on THE BORDER JUMPERS 1955 novel by Will C. Brown. Its theme, one of redemption, has much in common with Shakespeare's KING LEAR. And that cast! Julie London, Lee J. Cobb, Jack Lord, John Dehner, and Robert J, Wilke hit all the marks, and then some. I'll be writing more on this gem at some point in the months to come. 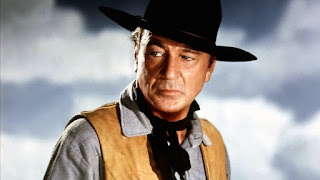 Move It On Over

Thanks for stopping by but my latest post titled Forgotten Western Classics: The Spikes Gang (1974) is at the Western Fictioneers. C'mon, lets head on over there together.
Posted by David Cranmer at 3:10 PM
Email ThisBlogThis!Share to TwitterShare to FacebookShare to Pinterest
Labels: Cash Laramie, Lee Marvin, movie, Western Fictioneer, Westerns

Buddies in the Saddle: Ron Scheer 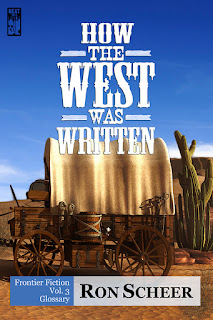 I finished my first Cash Laramie short story in over seven years and before I crossed the finish line, I spent some time with an old cowboy friend of mine named Ron Scheer. I met Ron online, here at Blogger, over our mutual appreciation for the Western genre. Before he sadly passed away in 2015, I had the distinct privilege of publishing his three volume series How The West Was Written with BEAT to a PULP. The third volume contains colloquial words he had found in the numerous classics he had read, and it was an indispensable resource while working on my latest hardboiled western. Thank you, Ron, for sharing this gem not only with me but with everyone.
Posted by David Cranmer at 10:14 AM 6 comments:
Email ThisBlogThis!Share to TwitterShare to FacebookShare to Pinterest
Labels: Cash Laramie, Ron Scheer, Westerns 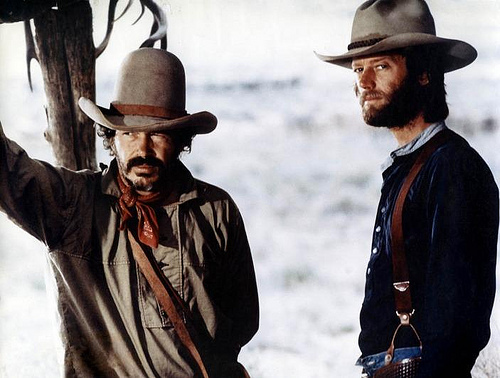 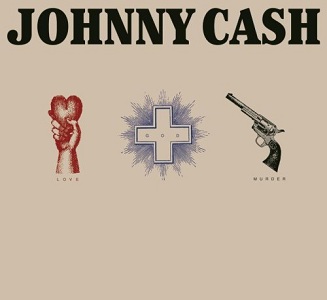 Johnny Cash (1932-2003) was one of the voices surrounding my cradle. In a small home in Varna, New York, would have been my dad, mom, and sister, and a baritone voice from an 8-track tape player singing about heady topics which I would learn to understand in the years to come. My musical interests expanded beyond country to rock, classical, and my go to favorite jazz. But even today, that deep voice and those songs still capture my attention, and before he died, Johnny Cash gifted us with a compilation titled Love, God, Murder (2000) with liner notes by Bono, Quentin Tarantino, and Johnny's lovely wife, June Carter Cash.

The "Murder" collection of songs has been playing on my Bose nonstop for weeks, whether I'm tinkering with a poem, editing a crime story for the BEAT to a PULP webzine, or riding the killing trail with Cash Laramie, who, yes, I partly named after Johnny. Inspirations abound. Take a song like "Don't Take Your Guns to Town," about a young man named Billy Joe who wants to be respected and rides into town with his guns hanging at his side. Hear that song just once and a movie begins playing out inside your head that could have been directed by John Ford. You see his mom crying over him and that dusty cowpoke laughing him down at the bar. It's not just a song but a narrative that gets into your ear and under your skin, and no matter how much you don't want Billy to make that fatal mistake to draw his pistols, he will again and again.

Another classic, "Delia's Gone," is about an unfaithful wife who's killed by the narrator. Unlike "Don't Take Your Guns to Town," there is no sympathetic protagonist, rather a jealous husband who appears to gleefully enjoy the path he takes—Cash was never afraid to go there in what Tarantino calls hillbilly thug life. I especially relish this particular compilation for the various points of view, whether from people witnessing a president's assassination in "Mister Garfield," a prisoner fantasizing about breaking out of Folsom prison, a man admitting to a murder to protect his best friend's wife from the shame of their affair, or an honest policeman allowing his criminal brother to get away "'cause a man who turns his back on his family ain't no good." That song, "Highway Patrolman," was written by Bruce Springsteen, and it has always impressed me how Cash could interpret other people's songs, slipping them into his own music book for a seamless listen. He's covered songs from a wide range of artists, from Hank Snow to Trent Reznor, with the ability to make them his own. How does he do it? I believe it's because his voice speaks with an authority that seems from The Almighty himself.

Any other Cash aficionados? What's your favorite song or album?

Posted by David Cranmer at 10:22 AM 2 comments:
Email ThisBlogThis!Share to TwitterShare to FacebookShare to Pinterest
Labels: BEAT to a PULP, Johnny Cash, music

I'm not sure why Cash Laramie returned, and quite frankly, I wasn't looking forward to it because I thought his story arc had been fully realized. Still, a few weeks ago, the antihero I created many moons ago tapped on my shoulder with a well formed short story. Over the course of an afternoon, I knocked out the rough draft and have been polishing it up ever since. It reminded me that stashed in my coffer was a Nik Morton* novel called Death For a Dove featuring both Cash and his fellow marshal, Gideon Miles, and I immediately began readying that dynamite for publication.

On Twitter, I teased Cash's return and was astonished anyone had remembered, but many did with enthusiasm. To tease a bit further, my story takes place in 1902 when Cash is fifty years old and has pursued a wanted man from his home base in Cheyenne to New York. Nik's upcoming piece occurs in the 1880's on a riverboat with owlhoots, gamblers, a European princess, and a tiger! I enjoy working with Nik -- besides being a top wordsmith, he's been with me and these creations since the beginning. We've already begun plotting more Westerns for 2021. Well, time to stop yapping and get writing. 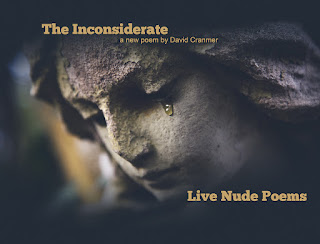 My latest verse has been published. I hope you find some time to take a look.
Posted by David Cranmer at 8:45 AM
Email ThisBlogThis!Share to TwitterShare to FacebookShare to Pinterest
Labels: poem

My minor, but heartfelt, contribution for Joyceans and Bloomsday 2020.
Posted by David Cranmer at 8:50 PM
Email ThisBlogThis!Share to TwitterShare to FacebookShare to Pinterest
Labels: Bloomsday, James Joyce, Ulysses 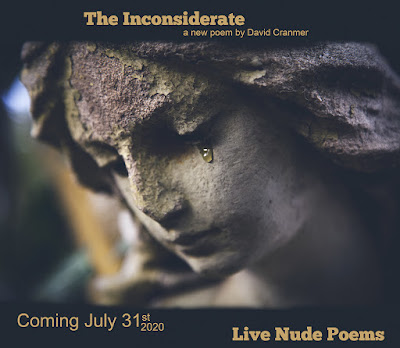