When we were at an RV campground recently, we got there ahead of the weekend crowd and watched as the sites filled up one by one. I was outside having a beer and reading a friend’s manuscript. My charmer was watching our baby coconut search out rocks and acorns beside the tow behind that we borrowed from my in-laws.

The parade filing in was a strange mix of senior couples in their brand-new, decked-out RV buses and packs of young families in broke-down campers that hadn’t been fixed since The Bradys toured the Grand Canyon. The retired living the high life of tranquility and the salt of the earth trying to forget about their underpaid, soul-sucking jobs that they’d have to return to in a few days. My baby coconut took time out from her treasure hunt to wave to each camper as they passed by our site, and nearly all were kind enough to smile as they waved back.

But there always has to be one, right? And this particular one was a tall, thin, pasty white, twenty-something a-hole walking his German shepherd. The duo walked behind our camper and didn’t reappear for several moments. I’m no fool. It doesn’t take that long to walk past a thirty foot tow behind camper. I know what man and his best friend had been up to, especially when they scurried past us without making eye contact. I jumped up and ran around to confirm. Yup. There it was. A huge, stinking pile of dog shit on the grass where my baby plays.

I ran back. “Hey, you mind picking up after your animal?” I called out after him.

Then it happened. The finger over the shoulder routine. He never looked back. He couldn’t have cared less.

“Nice,” I grumbled. I’ve learned not to make a scene in front of my daughter, and I just let it go. For the moment.

Over the next few days, the piles grew into a little Mount Everest. The dog had chosen our spot as his depository and his master seemed to revel in my quiet seething. Well, I’d had enough of being shit upon. While buying ice cream in the campground store, I overheard him telling the site manager that he was leaving the next day, and so I began plotting my revenge.

I woke up just before dawn and put on my darkest clothes. I grabbed gloves and a bag, then went outside and carefully collected a bag full of poop. I still had my anxiety of meeting up with a black bear, but I swallowed that fear and traipsed over to his shit-free lot and liberally scattered the contents of the bag at the base of his camper steps and around the small yard so there was no way he could get to his truck without stepping in something as he packed up. I considered adding it to his steps but I wouldn’t want to risk him hurting himself—I suppose the bastard didn’t deserve that.

After my task was complete, I went back to our little home and made myself a pot of coffee.

As the sun rose and the campers began to stir, I moved outside, plopped down in a lawn chair, and sipped the hot java. Sure enough, soon after, I heard a “WTF!” shrieked across the campground. From my vantage in the chair, I couldn’t see his lot, but later, as he was leaving and passed by, I was serenaded with an expletive and another middle finger, and I surmised he stepped in a footful of it.

My daughter and I waved goodbye with cheery smiles.

We borrowed my in-law’s camper for a weekend getaway and were having such a great time, we asked to keep the camper for the week even though I didn’t have time off from work which meant hauling my ass every morning from bliss to the daily grind.

About 9:30 at night on Wednesday, as I was reading in bed, my charmer came to me and mentioned that water had backed up in the tub.

“You could empty the tank before you leave for work in the morning,” she said.

“Nah, I won’t want to do it in the morning. I’ll take care of it now,” I told her. I get up before the sun rises and have just enough time to get myself out the door and off to work. Plus I remembered seeing in the paper that there had been coyote and bear sightings in the area and I didn’t want to take a chance of lumbering outside half asleep, reaching under the camper, and then feeling a chomp on my arm or leg.

So I put on my shoes, grabbed the flashlight, and opened the door. I took two steps down the camper stairs when I heard a growl that sounded like a demon right out of Hades. I flashed the light around and straight into the eyes of a black bear. I don’t even remember going back up the stairs and back into the camper. Perhaps, all my molecules reversed at once. All said and done, I was inside the camper in a shot, door slammed shut, and my heart pounding cartoon-style out of my chest.

“What was that?!” my charmer asked.

I emptied the tank in the dark of the next morning, happily, without being mauled. Barely (pun intended) an hour later, Denise took this shot of the bear at the garbage bin through the camper window. She wasn’t able to get a clearer picture before it decided to search out some better pickings. 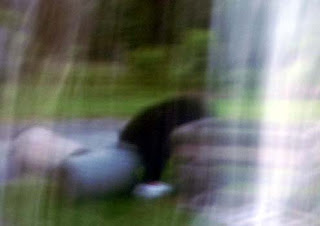 Has anybody else had a bear, or other wild animal, encounter?

BEAT to a PULP: ROUND TWO Is Out! 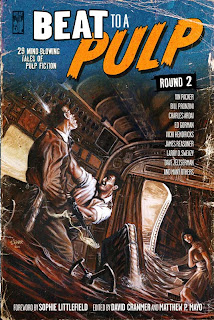 Smoke 'em if you got 'em, then set your jaw and steel your stance, 'cause BEAT to a PULP: Round Two is here! It's all meat, no filler in this red-raw-and-oozing collection of twenty-nine tales of pure pulp action. You'll find aliens, gangsters, drifters, mountain men, private dicks, gun molls, loners, misfits, drunks, thugs, booze-hounds, and more, all brawling in the pages of Round Two. And that's just for starters.

Seething with left-hooks, uppercuts, kidney shots, and gut-punches aplenty, this powerhouse compilation doles out the genres, from hardboiled crime, western, and noir to sci-fi, fantasy, literary, horror, and more.

Round Two covers all-new ground with offerings from a gang of tried-and-true heavyweights and inspired up-and-comers, all savvy purveyors of pulp at the top of their game. Haymakers include a Hemingway pastiche by famed mystery author Bill Pronzini, a stunning Chandler homage by Hard Case Crime kingpin Charles Ardai, a post-war tale with a twist from James Reasoner, a zombie-horror nightmare by Bill Crider, and even more blows to the temple from such hotshots as Glenn Gray, Patricia Abbott, Chris F. Holm, Vicki Hendricks, Sean Chercover, the legendary Vin Packer, and more, more, more!

Feel up to it? Then climb back in the ring. No lines, no waiting if you order your copy of BEAT to a PULP: Round Two NOW through CreateSpace and Amazon. Kindle eBook to follow shortly.
Posted by David Cranmer at 8:43 PM 17 comments:
Email ThisBlogThis!Share to TwitterShare to FacebookShare to Pinterest
Labels: BEAT to a PULP: ROUND TWO, Bill Crider, Charles Ardai, Chris F. Holm, James Reasoner, Sean Chercover, Vicki Hendricks, Vin Packer

The Proof is in the Box

Have you ever had that sensation of extreme exhilaration? The kind that doesn't go away for days? That's how I feel when a proof of a new book arrives in the mail. Seeing that book, picking it up and leafing through it for the first time--I imagine it's comparable to my daughter's pride in completing a task on her very own and her joy in seeing the cat and squealing "m-ow" for the umpteenth time. 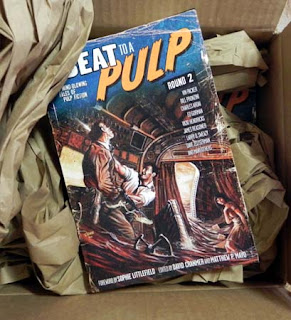 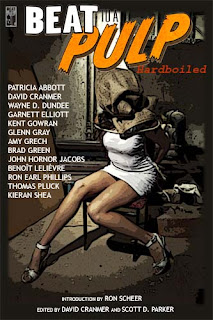 BEAT to a PULP: HARDBOILED won the 2012 Spinetingler Award for Best Anthology!! Thanks to all the incredibly talented writers involved with HARDBOILED and Scott D. Parker for his masterful hand in editing. And, as always, Little d for formatting and putting the cover together.
Posted by David Cranmer at 5:22 PM 17 comments:
Email ThisBlogThis!Share to TwitterShare to FacebookShare to Pinterest
Labels: BEAT to a PULP: Hardboiled, Scott D. Parker
Newer Posts Older Posts Home
Subscribe to: Posts (Atom)