I haven’t remarked too much on Doctor Who this season because I thought it was a lackluster ride. The actors were ready but the scripts, for the most part (besides a stout debut), were meandering, lifeless. Not so with the climatic “The Doctor Falls” that had plenty of action, heartfelt emotion, and one helluva final surprise that I won’t spoil here. Most poignant scene was a solo Twelve (Peter Capaldi) preparing to do battle with an outnumbered enemy (anyone for an upgrade?) saying that he goes, “Without hope… Without witness… Without reward.” Refreshing in this age when humanity seems to be all about winning as opposed to doing the right thing. Mention is, appropriately, made to the leader of the free world. 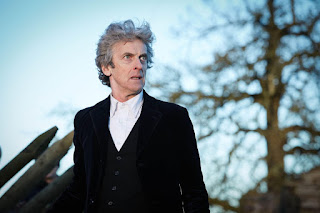 It would seem we have said goodbye to Bill (Pearl Mackie) for the time being. I thought she was excellent but like the idea of companions with shorter duration's. That being acknowledged, I don’t want to see Nardole (Matt Lucas) disappear just yet. He was a superb foil for Twelve with just the right amount of snarky wit. Back to that conclusion. Wouldn’t it be awesome if that older gentleman ended up being a companion to Twelve in the Christmas episode and for a few episodes into the next season. Yeah, here’s hoping.
Posted by David Cranmer at 9:02 AM
Email ThisBlogThis!Share to TwitterShare to FacebookShare to Pinterest
Labels: 12th Doctor, Doctor Who, Peter Capaldi

I enjoyed the final episode, although I've not been much of a Capaldi fan overall. From what I've read I'm pretty sure the "old man" is only around for the Christmas special (I'm assuming you realise who he is, and are just keeping things spoiler free, so I'll continue in that vein), but that another new character will be introduced possibly alongside 12, who will play that person is still a closely guarded secret.

Very aware of the old man and it made me smile just like I did when Tom Baker showed up for the 50th anniversary special. And I could almost go for companion free episodes for a while or maybe have an older companion return.

Nice post, David. I haven't seen any of the series. A little too far out for me now.