When I’m not reading submissions for BEAT to a PULP, I usually can be found around bedtime reading children’s books to my daughter, and, then after she's asleep, biographies for my own pleasure. Normally I prefer bios of authors or historical icons, like John Adams or Albert Einstein or Steve Jobs. Actors generally aren't high on my list, and, though Richard Burton was an actor I respected (for The Spy Who Came In From the Cold and, here’s the pulp kid in me, The Wild Geese and Where Eagles Dare), his bio wouldn’t be one I'd gravitate to. 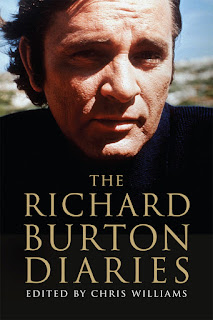 Just the same, The Richard Burton Diaries ended up on my Kindle Fire. At first, I thought I had made a mistake. As I swiped through the digital pages, I was kinda bored, and even when "E" entered the picture, it didn’t help things. (You know who E is, right? Yeah, Elizabeth and Richard were Brad and Angelina forty-five years before. Still, wasn’t interested ... never understood celebrity and probably won’t in this lifetime.) I almost gave up on the read, but then—this is going to sound weird—I felt like I was starting to relate to this Welsh-born thespian on a personal level. Maybe it was just his thoughts on being exhausted at the end of a long work day and how he just wanted to finish the latest novel on his nightstand. That sentiment is universal, right? With pithy diary entries, I kept reading on. More often than not, the diary is dedicated to what he ate, drank, and read for leisure. Burton was a voracious bookworm and could finish a novel in a day. He lists many, and I jotted down a few he recommended. He comes across as just an average guy, and his humble way of proclaiming the absurdity of the media circus about him kept me going.

Many, many pages are devoted to E. No doubt he loved her deeply. He worries about her tiniest fears and dotes on every aspect of her life. Almost too much but obviously they were river deep, mountain high in love. They divorced in ‘75 and got together again for work on the disastrous Private Lives play. At first everything went well with their public reunion but fairly soon Burton wrote:

"ET as exciting as a flounder temporarily…. This is going to be a long seven months. ET beginning to bore which I would not have thought possible all those years ago. How terrible a thing time is."

By the way, if you like reading about the famous knocking the famous, there are plenty of those moments sprinkled about. Franco Zefferelli and Jean Moreau get hit predominantly hard. As does the director of The Maltese Falcon, “Huston is a simpleton. But believes himself to be a genius. And a self aggrandizing liar. Cunning at it.”

Still, I find the best entries to be the quiet ones devoted to the women he loved and the children he adored ... the ordinary guy—the guy I get—who just so happened to become one of the most famous actors of the 20th century.

And somewhere across time—October 5, 1966 to be exact—RB was scrawling, “In case there is any mistake. This diary is written for my own benefit.” Maybe so, sir. But I came to enjoy your ramblings and thoughts on life. I was sad when your life in these pages ended. Salud.
Posted by David Cranmer at 9:23 PM
Email ThisBlogThis!Share to TwitterShare to FacebookShare to Pinterest
Labels: actor, diary, Elizabeth Taylor, John Huston, Richard Burton

Sometimes memoirs and diaries can be quite good. The ones I really like stop before the author "makes it" and becomes the reason that the book is published.

One of my favorite auto-biographies was by Charles Willeford. It was about being orphaned and riding the rails during the depression as a kid. I think it ends when he's about 12.

I used to read a lot of bios, mostly of writers and military figures, but haven't done as much lately. I should do that this summer.

Well, this is something of a surprise. (Understatement.) I would never have thought of reading this, I guess for all the obvious reasons, but your review has made me think again, and I just maybe will -- once I've processed the surprise. Much thanks.

I love the phrase 'river deep, mountain high love,' David!! :) Glad you enjoyed this one.

The saddest comment is his realization that the magic had gone with ET.

Not a book I'm planning to read but I enjoyed hearing your reaction. How funny - I usually think of ET phone home with those initials. Celebrities are a bit like extra terrestrials!

I am intrigued with it after reading the Jess Walter book where he came off pretty badly. In my young years, he was considered the best actor-now not as much.