Nik Morton at BEAT to a PULP 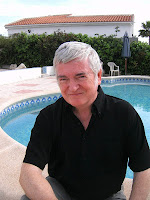 Bio: Nik Morton served in the Royal Navy as a writer, then went into IT. He has sold many short stories and edited several books and magazines. He now lives in Spain. In February 2011 he was hired as the editor-in-chief of the US publisher, Solstice Publishing. He is the author of Bullets for a Ballot. His book Write a Western in 30 Days is due in June, and he has just signed a contract for his 18th and 19th books, Wings of the Overlord, a fantasy quest jointly written with Gordon Faulkner, and Blood of the Dragon Trees, a thriller set in Tenerife. His ghost-written book Odd Shoes and Medals, an autobiography of an 80-year-old has just been released.

Let me just add that Nik is a good friend. He accepted the very first Cash Laramie story (for which I'm eternally grateful) and wrote one of his own with BULLETS. And I'm very pleased to say that he's back at BEAT to a PULP with "Bid Time Return."
Posted by David Cranmer at 5:19 PM
Email ThisBlogThis!Share to TwitterShare to FacebookShare to Pinterest

Loved this one. I'm an old guy who broke in on Burroughs and later Haggard.

Cool. Looking forward to reading. I liked Bullets for a Ballot quite a lot.

A devilish turn of events in that story. Well done!

And he never wrote a bad story!