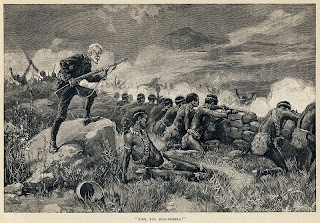 A few of us are reading KING SOLOMON'S MINES for the first time. We're taking it slow and just starting Chapter V: Our March Into The Desert.

I can see why this was such a hit in 1885 with the exploration of Africa, exotic animals, and mankind's never-ending thirst for tales of untapped riches. But what jumps out as me is how this plot has been mimicked so many times since. It starts with a back story of other adventurers lost or missing, a reluctant hero, and a trail laced with hidden dangers. Originality points (remarkable after 126 years) go to a fifty-year-old protagonist and no busty bimbo in tow. As a matter of fact, one of Quatermain's sidekicks has a glass eye, false teeth, and is a bad shot. The story is taking longer to build than say a RAIDERS OF THE LOST ARK or Doc Savage adventure but it's far from boring.

The above illustration of Allan Quatermain is by Thure de Thulstrup from "Maiwa's Revenge" (1888). (Source: Wikipedia)
Posted by David Cranmer at 6:03 PM
Email ThisBlogThis!Share to TwitterShare to FacebookShare to Pinterest
Labels: classic

My husband is right with you. Me, already behind.

Quartermaine's wish to go along on a sure-death adventure is a nice puzzle. Then there is his concern as a father for his young son, who is still a schoolboy and also the reader he is supposedly writing all this for. And a kind of sadness that for all his adventuring, he is not a wealthy man or supposedly adequate provider...

All the wild game hunting is a reminder of how this was once widely recognized as a legitimate sport, before anyone had ever heard or thought of "endangered species."In the American West at the time, the buffalo herds had already been wiped out.

Is the character with the glass eye and false teeth a female? Because that would *really* be something!

Now what are we going to do with you, Patti. I'm very interested in Philip's take when we're done.

Ron, I like A.Q.'s feelings expressed for his son. Very nice touch I wouldn't expect from a book of this period. And interesting comparison with the American buffalo that I hadn't considered. I did see some Hemingway in Rider's big game hunting passages. I'm not sure that Ernest was influenced by these books but that's what jumped to mind as I was reading.

I'm enjoying myself so far(and yes David, I'm sticking to one chapter a day). One thing that struck me was the way the oxen were inoculated from disease(piece of diseased flesh cut into the tale). I 'n not sure when such a thing became standard(weakened virus to build antibodies) in medicine. never read that in any other older books before.

Randy, I know inoculations go back to early India and China but reading of it being done in an adventure novel this old was unexpected. According to his bio, Mr. Rider was involved in agricultural reform. Perhaps some of the knowledge was garnered from that work.

David, I agree with your observation on how the classic "hero's quest" formula is at work here --reluctant hero, preparing for the journey, etc. --and how HRH set the mold for the next 100 years of adventure.

I know that Africa in the 1880s was seen as the Last Frontier by the German and British empires, and there was much curiosity about it. So Chapter Four was a good establishing piece for the times --I bet it would end up on the cutting floor today.

Ron, you allude to the tragedy of such as hunt as we saw here. I'm not squeamish. I do own firearms and have indeed hunted. But I was really really glad when this chapter was done.

Hemingway, for me, is the only writer to pull off the big game hunting passages and not put me to sleep. I own and occasionally carry weapons but am not a hunter and the passion just isn't there when I'm reading about it.

You're right, Rich. This chapter would have been trimmed or edited out all together.

I read this book a number of years ago, and was really impressed. Very powerful imagery coupled with an interesting, but classically established sort of "archetype adventure plot". I have She kicking around and have been meaning to read it for some time; maybe I'll have to break it out this summer...

Jack, It really does hold up quite well and my plans are to read SHE which was even a bigger hit than KING SOLOMON'S MINES.

Thanks for stopping by and I see you posted one of my favorite scenes from The Longest Day.

Chapter four was difficult to read, indeed. Hunting I'm fine with; slaughtering animals just for the fun of it I can't abide. Again, it's an interesting mindset we see from the past, one that lingers still in the present, if less celebrated. Kill the beast, then have your servants go in and take care of the dirty work. Not so different from out of state hunters who prop up my state's economy by hiring outfitters who do everything but pull the trigger for them. Makes my blood boil.

As for the jungle/wilderness exploration stuff, I love it. I read The Lost City of Z last year, which I recommend to everyone. Has some interesting history as to the explorer societies in Europe that would finance these expeditions. It's interesting to think that back then they had no idea what might be encountered. I have a couple more books in my TBR mountain that deal with tracing the steps of old explorers. Looking forward to getting to them!

Just thought I'd add: if anyone is interested in some entertaining travelogs, and those set in Africa especially, check out Michael Palin's series of BBC shows. We just watched SAHARA a few weeks back and enjoyed it a bunch. He's also written a companion book for each series.

I love Johnny Cash too. I keep A Boy Called Sue in mind when naming my characters. He’s so funny. The upbeat music helps on this grey day. I haven’t read this book, but I’m commenting here as I can’t find a comment link above.

"... they had no idea what might be encountered." So true, Chris. When we read today we know what is out there but many readers back then had to be scouring these pages with bated breath. And I just checked reviews of the Grann book and it does look intriguing.

Rich, I had no idea Palin was doing these shows. Thanks for the link because this is my cup of java.

Sarah, I grew up on the Man in Black who is probably the one artist I’ve listened to longer than anyone else. Cash certainly ran the gamut of music but my favorites will always be the darker roads he traveled like "Delia’s Gone."

Awesome, David! I've always wanted to read this but haven't yet. You mention the mimicked plot. This always surprises me too reading with older tales. Fun stuff.

Jodi, Gorman knocked that baby (excuse the pun) out of the ballpark. If you get a chance EG has several short story collections that are darkly magnificent. THE END OF IT ALL is one that I would recommend.

I read it at school - right before Silas Marner, if I recall. Haven't read it since. Maybe I should. (Did see the film.)