Friday's Forgotten Books: Wolf To The Slaughter by Ruth Rendell 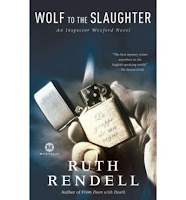 His figure remained lean naturally, no matter what he ate, and his greyhound's face thin and ascetic. Conservative in dress, he flattered himself that he looked like a broker on holiday. Certainly no one seeing him in this office with its wall-to-wall carpet, its geometrically patterned curtains and its single piece of glass sculpture would have taken him for a detective in his natural habitat.

I have been happily reading Ruth Rendell since discovering her in the pages of Ellery Queen Mystery Magazine years ago. Of course, Rendell and her famous creation, Inspector Wexford, are hardly forgotten but I thought I would dig out the second book in the series, Wolf to the Slaughter (1967), and shine some light back on it.

A woman named Margolis has vanished. There is no body to indicate a crime has been committed, only a letter signed "Geoff Smith" claiming she has been killed. Headquarters doesn't consider it a case worth looking into, however, Chief Inspector Wexford investigates anyway. As with any RR plot, there are plenty of twists and turns in WOLF and colorful character development. If you appreciate police procedurals coupled with complex mysteries, Rendell is a reigning master and you won't be disappointed.

And you won't be disappointed if you go to Patti Abbott's blog for more Friday's Forgotten Books.
Posted by David Cranmer at 1:01 AM
Email ThisBlogThis!Share to TwitterShare to FacebookShare to Pinterest
Labels: forgotten books

I have never read Rendell. Another way in which my readerly education is sorely lacking.

Rendell is one of those authors I know of but have never read. There's just so many...and I want to join the ranks. Sheesh! Too many books; not enough time.

Wexford...? Have there been any movies/TV series created with him? The name sounds familiar.

I read Rendell in my younger years. But I can't remember the last time I did.

I'm so glad I follow your blog and others like it, because I learn of writers and books that I've never heard of. There's a whole wide reading world out there.

I ditto others comments on too many books and too little time. There's a wealth of books out there that will whet the appetite of any reader. Your bit about Rendell is one of those.

Charles, Yeah but you got me beat in the sci-fi/horror department.

Scott, Yep and he was played by George Baker. I haven't seen the series but like everything British-mystery I'm sure it's good.

Randy, I try to keep up with RR and usually read the latest Wexford. Gossip was she was going to kill him off but she came forward and said that wasn't the case.

Laurie, Too many books for sure. And if I have forty years left I need to get cracking.

Barbara, I'm sure you would enjoy Rendell.

Thanks, Dvid for da tip!

I must have read the first forty books she wrote.

Patti, I know what you mean.

Cloudia, Is that French? :)

I haven't read Ruth Rendell for years - I remember reading one of hers that I though was amazing - can't remember the actual title but it was something like one down, two across but I remember the protagonists name - Stanley Manning, I think. Man that was a great book.

One Across, Two Down (1971) Super brilliant novel. Stanley was a terrific character. The only thing he liked better then crosswords was his mother-in-law's money... One of RR's finest.

I, too, have never read her. Thanks for the nudge in that direction.

Rendell is probably my favourite modern crime author - in a strong field. I liked this early book, though my number one fave is A Judgment in Stone - truly brilliant.

Martin, A Judgment in Stone was another winner for sure. Just an incredible crime author and just as good today as she was at the start.

David - I'm not keen on her Wexford novels but I love her stand alone ones. Have you ever read any of her darker stuff under the pen name of Barbara Vine?

I have read the Vine novels and admit there is an edge to them. But I prefer old Wexford.