I’m geeky when it comes to old book inscriptions. Hell, I’ve even written a short story (needs polishing before sending it out) called “An Old Address” about a mystery buff who confronts a murderer after reading an enigmatic scrawl. So, when my wife bought me a 1925 edition of BEST SHORT STORIES OF THE WORLD (edited by Konrad Bercovici) for my birthday, I’m naturally intrigued by the vague message that reads "Easter Eve afternoon 1938. With bigger and better hopes of resolutions to come! -Fritz." Easter Eve afternoon? Exclamation point? Fritz? Not as mysterious as my tale which leads to the book purchaser's unfortunate fate, but like I acknowledge, I’m curious and left wondering. (And yes, I smell books too.) 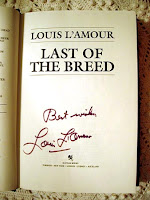 I made an undeniably cool discovery a couple of weeks ago. I’ve had Last of the Breed by Louis L’Amour on a shelf at my folks house since the eighties. I believe my dad brought the book home from the days he worked at Ithaca College and it has sat in a mostly pristine condition ever since. Well, several months ago I read my first L’Amour, Flint, and now, while back at my mom's during some time off, I figured I would break open Breed to give it a look. To my surprise, I have an original signed edition. Twenty years ago it didn’t mean much to me but now it will have a prime position on my bookshelf and be revered evermore.

Anyone else have an old book that yielded prized booty?
Posted by David Cranmer at 1:02 AM
Email ThisBlogThis!Share to TwitterShare to FacebookShare to Pinterest
Labels: book, random

I am jealous. 'Last of the Breed' is my favorite of L'Amour's books. To have an inscribed first edition would be wonderful.

I was in a bookstore that notoriously overprices books and saw a hardcover copy of Pare Lorenz on Film in pristine condition. I almost didn't look at it because I had a paperback copy, but decided what the heck - can't hurt to see what it costs.

I turn the page and - yup - signed by none other than famous filmmaker and writer Pare Lorenz.

Of course I bought it. Then I started wondering why they didn't value the book more, or why no one else didn't pick it up first. Oh well, either way, the book is a prized piece on my shelf.

I have a first edition book by George MacDonald "The Princess and the Goblin" published 1886. It's not signed, but still has it's tissue paper infront of the illustrated pages throughout. There are updated copies available in the children's section of many bookstores, but they aren't the same without the stylized morals from the late 1880s.

Corey, BREED is very different from the L'Amour we are accustomed too. I get the sense that Tom Clancy's success may have had an impact in this change of direction. Whatever the case, it's a good read.

Cullen, I'm betting no one knew who Pare Lorenz was and figured they couldn't get much more for it. What a great find for you.

Barbara, My wife loves old children's books and the chief reason she says is the old illustrated pages. They are works of art.

Good! I'm not the only person in the world intoxicated by the smell of old and new books. David, if you want a great, great story about old books and the mysteries they can contain, read Carlos Ruiz Zafon's The Shadow of the Wind. It's excellent and one of my favorite books. Period. (Or, if you're reading schedule is booked [heh], you can wait for my review of TSOTW for the May Book Review Club.)

As to your wife's love of old children's books, is she familiar with Virginia Burton Lee's The Little House?

Oh, and pray tell about "Not as mysterious as my tale which leads to the book purchaser's unfortunate fate"

I found two signed editions by Philip Roth and someone i had never heard of at a library book sale. I'm surprised no one thought to check them, since they were those special bound editions from the Easton Press.

My favorite book in this line is Shaw's "The Intelligent Woman's Guide to Socialism." The owner decided to debate Shaw and spent the first twenty pages or so scribbling her arguments before giving up. She finished her debate by adding a "?" to the title on the spine, after "Intelligent". In the old days, she would have been known as a woman with Firm Views.

What a great treasure! I love Louis L'Amour books. Have you read his autobiography? It's a great read.

Scott, The Shadow of the Wind has been added to my TBR list. Don’t laugh because I end up getting to them all at some point.
Thanks for asking about my short story. I plan on submitting “An Old Address” to EQMM later in the year. First, I have “The Education of a Pulp Writer” at Yellow Mama next week.
My wife (Denise) is familiar with the name but hasn’t read the book.

Bill, I’m sure her scribbling is as entertaining as the book. How old is it? The reason I ask is because I’m reading some Father Brown mysteries from the turn of the 20th century and G.K. Chesterton spends a fair amount of space discussing socialism.

D.A., I haven’t read the L’Amour bio but I can imagine he brought the same poetic touch that he brought to his fiction. I’m reading his collection of crime stories now and they are quite outstanding.

I also love the smell of old books and congrats on the book. What a thoughtful present - I usually get socks or after shave.

Great post, David. I often feel like books are living things, with a mysterious history, too. And that message!! I want to know who Fritz is...

Very cool find with the L'Amour book. My husband and I went through a first-edition, book-buying phase a few years ago, and scooped up some meaningful ones for us. My parents also have some from Byron, Wordsworth, etc, which I love to look at...from afar. ;)

Archavist, A man needs socks so consider yourself fortunate.

Sarah, It sounds like you have a fantastic collection of books. I do also but unfortunately (being a gypsy) they're scattered everywhere.

Don't know if anyone has read Will Christopher Baer's Phinos Poe trilogy, if you haven't you are missing out. Anyway, I picked up a hardback of Panny Dreadful at a discount bookstore for a friend, got home to wrap it, glanced inside and saw that if was a signed copy. I traded my un-signed copy for the signed copy. Had to do it.

There is something so sad about an autographed book lying deserted in a pile. Also old picture albums. Somebody in the family should want these things.

Frank, Sounds like you made a wise decision in the trade... I'm committing Christopher Baer's Phinos Poe trilogy to memory.