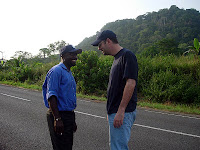 I worked in Cameroon from 2004-2005 and aside from learning so much about the culture in this part of West Africa, I became good friends with Boh Cyprain. This is a pic of us goofing around on the highway to Kribi in Africa. Mr. Boh and I have stayed in contact and here is his eighth MTM highlighting his country's customs:

BEFORE MATERNITY LEAVE EVER EXISTED

Maternity leave had long existed in the African context before we have gradually grown to embrace what a worker will benefit when she gives birth in active service. In Cameroon particularly in the remote villages of the centre Region, there exists a kind of maternity leave which has to do with keeping the wife way from the husband for period of at least three (03) months.

Here, it is but normal that when somebody's wife takes in, she is not very subjected to pre-natal visits due to lack of medical facilities, she remains with the husband for up to the period of seven (07) months and she moves to the parents' home where the mother with her world of experience keeps a close watch over her daughter all through till she is delivered of the baby. This change of domicile is considered very important as the husband's family cannot take the same amount of care as would the wife's during such a delicate period in the life of their daughter. It is not disrespect as someone might think but an obligation because her return to the husband entails a big ceremony.

During her stay at the parents, she is being monitored and whenever child movements become intensive indicating an approach to the period of labour, the family constructs something in the form of a cage around the bed on which the mother to-be will be staying with the new born (this takes the form of a mosquito net ). When the baby finally comes, the mother and new born are moved into this new haven. Access to this area is very restricted; in fact, it is granted only to the father of the baby and the grand mother who has the charge of helping to bath the baby and supply food to the nursing mother. This is done to keep away those who visit with ill-intentions; people are not allowed to carry the baby as it is done in other regions in Cameroon for fear that someone might have rubbed bad charms on his/her palms and may successfully place a plague on the child if allowed to carry. From time to time, the grand mother bathes the young mother with juice gotten from a collection of boiled herbs; with this, she massages the new mother's stomach in a bid to give it back its original shape. The routine continues until the husband expresses the desire to have back his wife; however, the wife's family will never in this region suggest that the husband should come for his wife because this will mean that they will lose all the gifts and feasting that comes when she’s returned at the request of her husband; thus, "a bride price is never completely paid no matter the articles and cash gifts you give the day the marriage proper is celebrated."

When the husband's family is set or prepared, they send a messenger to their in-law family to declare their intentions to take home the wife on a proposed date. The wife's family might change the said date depending on the tides of the time because some families insist on carrying out their harvest before any such occasion can hold because it entails a lot of feasting. If there is a famine they have every reason to have the dates changed. When finally both families reach a compromise, they both invite their close relations and the day the male family comes, they bring along gifts just as in the day they came to pay the bride price or 'dowry'. There have been situations wherein husbands' families have come and gone empty handed (without the wife and new born) because the in-law family wasn't satisfied with what they brought in the name of gifts.

On the D-Day, the women folk sit together while the men do same; that is to say the men from the husband's family join those from the wife's family while the women do same. Food and wine are served to the male side by the women and while they are eating, some elderly women are assigned to keep a close watch on them with attentive ears; this is because during this meal, nobody is allowed to eat the bones from the meat no matter how soft they could be. All dogs if any at all are chased away from this area because not even a dog is given a bone to eat or any part of the meal. When feasting is completed, all the bones and leftovers are now gathered and a pit is dug behind the main house and these remnants are now buried into the pit. This is done in order to guarantee the solidarity of the new family that is just beginning to build.

After this, the presentation of gifts starts and immediately after that, the woman's father makes a speech expressing his feelings as per the quantity and quality of the gifts he has just been presented. He gives his consent and the husband's family is now allowed to take home his wife; in a situation where the woman's father fails to give his consent, pledges start coming in or a quick remedy is sorted to avoid any disgrace.

For more MTM posts, check out Travis Erwin's site.
Posted by David Cranmer at 1:01 AM
Email ThisBlogThis!Share to TwitterShare to FacebookShare to Pinterest
Labels: Africa, My Town Monday

It's a whole different world. What type of work were you doing there?

I am glad to read about like in West Africa again, David. And to hear from Mr. Boh again. Other cultures really do support mothers and babies.

D.A., I was part of the security for the new embassy being constructed. For the most part, a great job.

Debra, It was nice to receive another post from Mr. Boh and I'm glad you stopped by. I will click over and check out From Skilled Hands.

Barrie, Without a doubt.

Such interesting cultural practices we have in this world. And so widely varied. Intersting post.

How nice to return to West Africa. And what interesting practices. So many make sense when you seen them within a culture and climate.

Thank you for your insight and insider's explanation of the cultural practices surrounding childbirth in your portion of Cameroon.

It is a very engaging read.

Thank you for hosting Mr. Cyprain's MTM contribution. You are a gentleman.

Charles, I will forever remember making fun of one of his customs and he reminded me how strange it seemed that kids put a tooth under a bed and waited for a tooth fairy. "What a rich country you have." He said with a smile.

Patti, I hope one day he can come to the US. Mr. Boh's reaction to our customs would be fascinating.

Sepiru Chris, Thanks and Cyprain says thank you as well. His internet connection can be maddeningly slow most of the time so he doesn't respond to each comment. I remember that to load a single page in Cameroon could take upwards of two minutes and it was expensive paying by the hour. However, he always writes afterwards how touched he is by everyone's interest in his country.

Interesting to read about other cultural practices. I have friends who had to quit teaching 25 years ago because there was no maternity leave.

When pregnant 30 years ago midwives were fighting for accreditation in hospitals in Canada. My daughter gave birth a year ago. She had the services of a hospital accredited midwife (who made house calls), and followed up with support regarding breast feeding and healthy baby advice.

You've certainly seen a fair but of the world - What is it you do exactly - you get about like an international playboy.

Amazing differences. And I have not forgotten the shirts but unfortunately the first batch I bought burnt before I got them mailed off. But I will replace them and get them off to his family shortly after we get resettled. Please tell him I have not forgotten.

Fascinating! It is interesting how different areas of the world came up with such diverse ways of handling birth and the attendant problems that could arise.

Glad to hear from you again Mr. Boh.

It's fascinating to learn about other cultures. It sounds like the isolation of mother and child gives them some time to really bond, and how important that is. Folk wisdom at work. That Mr. Boh for sharing stories about his part of the world.

Jenn, It’s interesting how times have changed in our country and for the better.

Travis, I will pass the message along, and knowing Mr. Boh, he will say no rush especially considering what you have been through.

Reb, Incredible differences with positive and negatives to both cultures, for sure.

Linda, I will let him know you appreciated the post. There are several others in my archive if anyone is interested in taking a look back.

Thbaks for this journey to a very different life! aloha-

It's very nice to hear another of Mr. Boh's stories from West Africa. This post was particularly interesting.

I'm glad you enjoyed it!

Although I would have had no desire to leave my husband during pregnancy, it is touching that they take such care with their new additions to the family and with the mother.