No Room For Prejudice 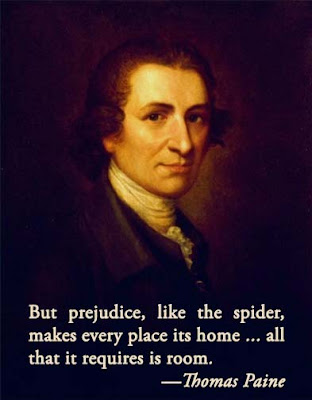 This Charlottesville thing, if the angry anti-protesting group would have stayed home, nothing would've come of the White nationalist protest. It would have died quietly.

Really? I strongly disagree with your position. If neo-Nazi's come to my town, Oscar, I am going to stand tall and protest. Heather did the right thing and unfortunately lost her her life. But for evil to spread, as you know, good people stay home and do nothing.

Thomas Paine...the most important person not of the colonial aristocracy in the US war of independence...and, as such, died in France. A Dangerous Man.

The Nazis and co. were looking for martyrdom and an excuse to pick fights, of course, but that's no reason to not let them know how little they're loved by the sane. All the chest-beating by the more physically bouncing anti-Nazis can be a bit tiresome (particularly when it starts sounding like the same sort of spoiling for a fistfight or worse that the Nazis keep claiming they want), and it's no fun listening to these jackasses go on about how justified their one loon was as he used his car as means to hit a crowd...

So much condolence to the loved ones of his dead victim, and the injured he also left on that street.

Todd, Well, Paine escaped France thanks to James Monroe and was eventually invited back to the US where he died in New York in 1809. Then in a morbid turn his bones were spread to and fro sold for profit. For me, he remains the defining voice of the era. Common Sense was the spark that ignited the masses.