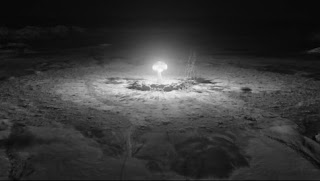 “Gotta Light” is a subversive, expressionistic, and harrowing episode with prolonged scenes—even by Lynch standards—of no dialogue. “As soon as you put things in words, no one ever sees the film the same way,” he was quoted as saying in The New Yorker. The sobering result: we hear the eerie, discordant “Threnody for the Victims of Hiroshima” by Penderecki as we bear witness to the first atomic bomb test at White Sands, New Mexico, on July 16, 1945, and are pulled into the mushroom cloud among the swirling atoms of hellfire and destruction.

Rest of my thoughts on The Return Parts 8,9, and 10 at Criminal Element.
Posted by David Cranmer at 4:46 PM
Email ThisBlogThis!Share to TwitterShare to FacebookShare to Pinterest
Labels: David Lynch, review, Twin Peaks

That blast at Hiroshima was a world eye-opener, and ended WWII.

Wow. I was not aware of this. Have to give it a view.