My Influences... And Yours?

I'm back at LitReactor with a new article. Please share, stop by there/leave a comment, write home to mom, etc. Here's a sample: 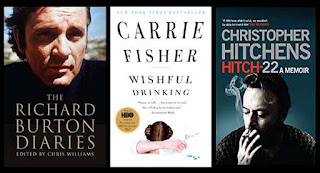 Like many writers, I was reared on a never-ending veneration for big guns such as Ernest Hemingway, F. Scott Fitzgerald, James Joyce, and Virginia Woolf. Authors who’ve passed some ‘immortal’ litmus test for stuffy academic types to get overly excited about. Harsh? Perhaps, because most of the top tier lit club have deservedly earned their marks. But along the path I’ve learned some of the best prose originates from sources other than these writing titans. Here are two actors—who apparently fancied putting pen to paper over starring roles—and one journalist that I would stack up with the best of the best and have returned to often for inspiration.

I've read some Fisher and some Hitchens. Loren Eiseley is probably the essayist who has most influenced me.

I've read a little Hitchens, interesting writer, but a little liberal, great sense of humor.
Haven't read the other two. I think my wife would like the Burton diaries.

Oscar, I'd say Hitch was a lot liberal. Started out in the Marx camp.