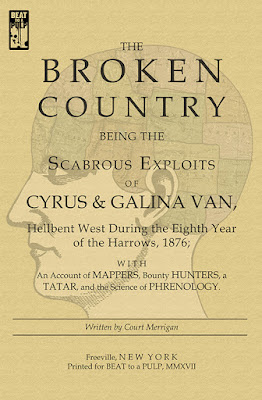 Our latest BEAT to a PULP release is a partnership with the talented Court Merrigan with one very looong title. You ready? Ok, here it goes: The Broken Country: Being the Scabrous Exploits of Cyrus & Galina Van, Hellbent West During the Eighth Year of the Harrows, 1876; With an Account of Mappers, Bounty Hunters, a Tatar, and the Science of Phrenology.

Set in post-apocalyptic 1876, The Broken Country tracks the scabrous exploits of the outlaws Cyrus and Galina Van. The pair kidnaps a naïve, young scion and head west in pursuit of gold, glory, and respect. Along the trail they met Atlante Ames, a mapper who euthanized her own father and now seeks her twin brother, himself gone outlaw in the ravaged West. In cold pursuit rides the implacable bounty hunter Hal, who takes scalps in the name of Jesus Christ and the science of phrenology, and the contemplative Buddhist assassin Qa'un, paying off the bloodprice he owes Hal … bounty by bloody bounty. Cyrus and Galina's hard road west comes to a head in a dynamite-tossing, six-gun-blazing shootout at the old train depot in Laramie.

A dark journey to a time when wagon trains have retreated and the Old West is haunted by bonepickers and starving tribes, The Broken Country is unlike any other book you will read this year. And we have never written a truer statement than that last sentence. Here's the Amazon link to buy either print or ebook.
Posted by David Cranmer at 5:45 AM
Email ThisBlogThis!Share to TwitterShare to FacebookShare to Pinterest
Labels: bounty hunters, phrenology, Tatar, The Broken Country, western

Court has written something beyond the usual tropes. Glad to publish it for him.