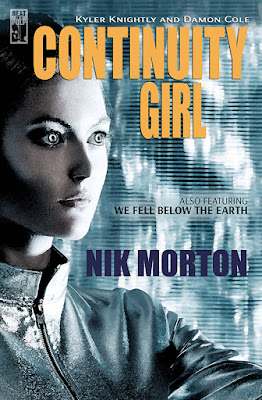 The latest release from BEAT to a PULP and Nik Morton is now available for kindle pre-order. Print to follow.

In our future, Kyler Knightly and his uncle Damon Cole are field agents for Continuity Inc, a private organization that obtained the contract when the government Time Corps was deregulated. CI is dedicated to protecting human history.

They use the Zygma projector to travel through time and must carry a focus object from the period they’re targeting.

Kyler is also a dreamer with passive psychic talents, a precognitive.

The head of the group is an Artificial Intelligence character, Sennacherib, which possesses an organic interface, sharing the body of a two-spot octopus in an aquarium tank! Their offices are in the West End of London, a disused theater.

The third book in the series brings two more exciting time-travel adventures for Knightly and Cole of Continuity Inc.


Kyler is accompanied by the delectable yet mysterious Tertia Beynon. Their mission is to trace an academic who has traveled to Roman Britain in 192 AD. Precog suggests that an interfering event in this past will radically alter the future. Arriving at Hadrian’s Wall in the freezing winter, the pair encounter blood-thirsty argumentative locals and then obtain the aid of Governor Clodius Albinus in their trek on the northern side of the wall. Here they are confronted by Ambrosius, a druid who possesses arcane power.

Nothing seems simple. Action abounds, with brutal sacrifices, deadly swordplay, a fraught chariot chase and an attack by a pack of wolves.

With all this going on, will they be able to save their future in time?

“What an exciting zip back to the past with some really neat time travel twists! The story may be short but it’s packed with plenty of entertaining ‘what ifs’ and action near Hadrian’s Wall. And for good measure, the conclusion just might be something you don’t expect!” —Nancy Jardine, author of 'The Celtic Fervour' series

WE FELL BELOW THE EARTH

Our duo are helped by Tertia and Chief Inspector Irving. Corpses drained of blood point to a clue, a letter from Bistritz in 1897. Kyler and Cole are sent to Transylvania.

The conclusions are inescapable: it seems that the discovery of time travel—even though it’s regulated and Continuity Inc strives to protect history—heralded in a sequence of parallel time-streams. Where before these time-streams were ‘what if’ scenarios, now they’ve split into different realities. In some, fiction is fact.

The deaths, the blood and gore point to vampires being real, and they’re certainly not your idealized romantic sort. The evil blood-suckers are intent on feasting in Kyler’s present and spreading their contagion ...
Posted by David Cranmer at 5:29 PM
Email ThisBlogThis!Share to TwitterShare to FacebookShare to Pinterest
Labels: BEAT to a PULP, CONTINUITY GIRL, Nik Morton, Science Fiction