Dundee On Hell Up

I saw this Amazon review from Wayne D. Dundee for HELL UP IN HOUSTON, the second in BEAT to a PULP’s Jack Laramie series, and I had to share. Thanks, Wayne.


Hell Up In Houston is a Hell of a Good Read by Wayne D. Dundee 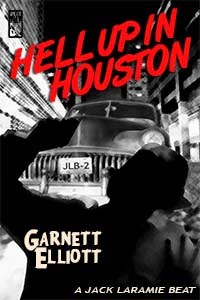 This second title in the Jack Laramie series is another intriguing entry that slams the roaming PI up against some mighty hard edges and spins him around in a number of deft plot twists. The pace never lets up and, even though you know Jack is going to get his bearings and do some hard pushing back before it's all over, you're driven to keep reading in order to find out how and also learn the answers he needs before he can settle all scores.


Spawned by David Cranmer's popular Cash Laramie westerns, Jack is the grandson of ol' Cash who --- in place of his grandfather's U.S. Marshal star --- has taken up the plastic badge of a PI during the early post-WWII years. Unbound by a standard office in a particular city, however, Jack roams West Texas and surrounding areas hunting up cases where he finds them. He covers the miles in a hard-driven old DeSoto, pulling a horse trailer that serves as a mobile office and, as needed, his living quarters. This concept gives the overall series a nice distinction right from the get-go.

In this tale, returning to Houston is just about the last thing Jack wants to do. The last place he wants to be. But misfortune, in the form of a blown radiator on his DeSoto, plants him there ... and, by the time he's ready to leave, he has even more reasons for never wanting to go back
Recommended.
Posted by David Cranmer at 5:42 PM
Email ThisBlogThis!Share to TwitterShare to FacebookShare to Pinterest
Labels: BEAT to a PULP, Cash Laramie, Jack Laramie, Joe Hannibal, Wayne D. Dundee

Nice review. I enjoy Wayne’s take on Cash, good to hear there is another in the works. Seems like I need to check out Hell Up In Houston too.

Wayne's "The Empty Badge" will be the cornerstone of TRAILS OF THE WILD: NINE TALES OF THE OLD WEST to be released next week. It's a Cash Laramie novella with a guest appearance by another well known Edward A. Grainger character.

Nice on all fronts.