Bill Crider's Evil at the Root 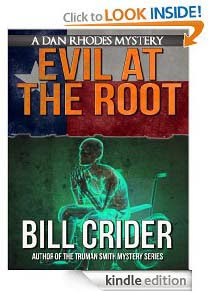 In this latest Sheriff Dan Rhodes adventure, Bill Crider sends the small-town Texas lawman to investigate the apparent theft of a set of false teeth from one of the elderly residents of the Sunny Dale Nursing Home. The case, which begins as one merely embarrassing ("Ah ain't got no TEEF!") quickly turns serious when the owner of the missing dentures, one Lloyd Bobbit, is found suffocated with a plastic grocery bag.

The prime suspect is a fellow Sunny Daler, Maurice Kennedy, who was known to have had no love for the cantankerous Bobbit—a feud that originated way, way back in the youth of the two men. Now Kennedy is missing—but is he the killer or another victim?

Meanwhile, Rhodes and his two attenuated jailers have been hit with a lawsuit claiming dangerous and inhumane conditions at the local jail. There's not much of a case, considering that the town's best cook provides the prisoners' meals. With all that's going on, Rhodes scarcely has time to pay proper attention to his fortunately ever-patient fiancée, Ivy Daniel.