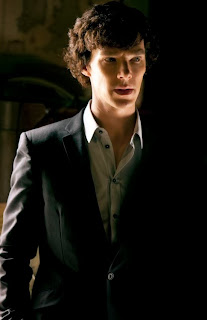 I’m late to the game here—no surprise—finally watching Benedict Cumberbatch’s Sherlock Holmes set in present day England. Didn’t think they could pull it off, but the way they’ve combined modern tech with Sherlock’s computing brain is riveting. Martin Freeman as Doctor John Watson, who’s returned from grueling tour of duty in Afghanistan, is a perfect match as a man of action. The whole cast and presentation is above the average, and it got me thinking of my list of top SH portrayals. Starting with:

Jeremy Brett -- The definitive Sherlock Holmes. An actor who melded with the role. Brett appeared in 41 episodes of the Granada series (1984-1994) and became the new standard.

Benedict Cumberbatch -- This updated SH makes me forget that Holmes was originally a 19th century detective. So far I’ve watched only the first two episodes, “A Study in Pink” and “The Blind Banker,” and if the rest of the series holds form, I’m sold on Cumberbatch.

Basil Rathbone played the part from 1939-1946 -- The first Sherlock Holmes I ever watched. When the SH name is brought up, I immediately think of him in my mind’s eyes. I still enjoy watching Rathbone’s The Hound of the Baskervilles film, though I didn’t care for his Holmes update to the WWII war effort.

Peter Cushing (1968) -- The production doesn’t quite live up to others in standards, but Cushing delivers an equally tremendous performance. I recently watched his SH portrayal on a new DVD release, and plan to watch them again soon.

Also in my top ten would be Arthur Wontner, Michael Caine, and Christopher Lee. Since some 75 actors have played Sherlock Holmes in 200 plus films, maybe my partial list is quite different from yours. Set me straight, my Sherlockians!
Posted by David Cranmer at 9:55 AM
Email ThisBlogThis!Share to TwitterShare to FacebookShare to Pinterest
Labels: Basil Rathbone, Benedict Cumberbatch, Dr. John Watson, Jeremy Brett, Peter Cushing, Sherlock Holmes

Often I'm amazed at how much Holmes stuff is out there. I've certainly seen and read a very tiny fraction of it.

Near countless as I scoured the net.

Not much of a fan of either modern day Sherlock. Won't even watch them. Don't care for the revisionist Holes of Robert Downey, Jr. either.

Brett is maybe my favorite Sherlock. I like the others you mention and it might take some thinking to come up with some others.

I don't care for the Downey Sherlock either, Randy. But Cumberbatch's (what a name, huh?) Sherlock is in another category altogether. Very faithful to Doyle--just updated.

Really dislike the Downey movies. Don't think they capture the feel of SH at all. He is the same character in IRON MAN.

Agree, Patti. In SH name only. Fine action films as they go but that's about it.

I'll say this for the Downey films: If you go back and read A Study in Scarlet and read how Watson first describes Holmes, what he can do, etc., you can see where Downey got his inspiration. It's there in the beginning. Doyle, however, veered away from that initial list and didn't bring up some of the material in later stories (i.e., the fighting).

BBC Sherlock is fantastic. Love it for what it is: an update. Love Elementary for what it is: a modern re-imagining. Caught the premier tonight. Brought in Mycroft and Lestrade for first time.

Yeah, the Downey take on the character was way off the mark. And the new show "Elementary" also misses the point in a big way, I think. But Cumberbatch is excellent and so is Freeman. Very clever writing on the show as well. I love Jeremy Brett, and like you consider him the standard by which all Sherlocks are measured, but Cumberbatch comes very, very close.

Scott, No doubt SH was an early action hero but Downey (superb actor) doesn't nail the character for me. Like Patti says I feel like I'm watching Tony Stark. Jude Law is fine as Watson but is unmemorable next to Freeman. And I know a few viewers who like Downey but thought the second film to be a huge letdown.

Heath, I haven't watched Elementary and the way I watch TV it may be another decade or so before I get to it. Agree that Cumberbatch is in the Brett arena. I also enjoyed his turn as Khan in the recent Star Trek Into Darkness.

I think you will very much enjoy the rest of the episodes. Benedict and Martin are fantastic in their roles. To successfully bring this classic story to a modern day setting is quite a feat. Haven't watched Elementary, but it doesn't seem to grab me judging from previews and what others are saying.

Jay, Same here on Elementary, Could be a fabulous show but the previews I've seen (even with Clash's London Calling) isn't making me want to watch it. Glad to hear the rest of the episodes will deliver.

I've never been interested in Sherlock Holmes; saw the first Downey movie and didn't like it enough to see the second.

However, this post does clear up ONE mystery for me: it answers the, "So who the hell is this Benedict Cumberbatch dude anyway?!" question I've had. It seemed to be a big deal when he was cast in the new Star Trek movie, but I didn't know who he was. His name has come up since in relation to other stuff . . . still didn't know. I figured he had something to do with Dr. Who, another character/show I've never had any interest in.

Now I know, though, thanks to Sherlock Cranmer!

Same here, Chris. When Trek/Darkness was rolling into theaters I was rubbing my scraggly goatee and asking what's a Cumberbatch?! Damn fine actor is the answer.

I've only seen one ep. of this with Cumberbatch. I was hooked. He does a fine Sherlock and the updating works.

Leah, The way he uses a cell (or mobile as the Brits say) is inspired. We will be watching the last episode of the first series tonight. "The Great Game" which I'm hearing involves Moriarty.

Food for thought: Laurie King wrote some excellent mysteries that feature both Sherlock Holmes and her creation Mary Russell. They are set in the time period of Edwardian England. The book "The Beekeeper's Apprentice" is where collaboration effort starts.

As for Sherlock Holmes portrayal, Jeremy Brett is by far the best. Everyone else pales by comparison. Also, the Grenada series portrays Dr. Watson as he is meant to portrayed: smart and intelligent. Not like the fool in all of Basil Rathbourne's movies.

Yeah, poor Nigel Bruce, a competent actor (with many top performances) but will always be remembered as the bumbling assistant. It seems since that period Hollywood had gotten it right be equaling Watson's character with SH. And Thanks for the tip on Ms. King's stories, G.B.

I adapted The Sign of the Four many years ago as a radio play for some actor friends. I remember discovering the complexity of the plotting. It was hard to translate to another medium. But I realized that in another life, I would have enjoyed writing radio drama in the days before TV.