Garnett Elliott and I were at the cyber bar off Sunset Blvd, having the last of our Sam Adams. I had put the finishing touches on formatting his “Hell Up in Houston” earlier in the day.

“Drifter continues to sell a couple of copies a day, which is good.” I said. “Word of mouth continues to build. Wayne D. Dundee and Keith Rawson have agreed to write a Jack Laramie. And I'm going to write two.” I swallow the last of my amber brew.

Garn downs his ale faster than he could spill it. He glances at what remains of his hairline in the mirror behind the bar and says: “The lineup looks good, David, and I can start work on #3 shortly.”

“You mentioned Lansdale as an inspiration. Any movies in particular? I'm looking to motivate myself before writing,” I say, reaching for my Kindle Fire that I had brought along to show off the “Hell Up” book.

“Hud and Giant are good—if long—Texas movies, though they're not really noir. Most of the inspiration so far has come from talking to co-workers who are from different regions of the state, also reading Thompson, and Latimer, who wrote Solomon's Vineyard. That story in particular had an influence on “Hell Up in Houston.”

I leaf through the Kindle and find Vineyard but a little expensive for my weekly allotment for books. Then I find Jim Thomson’s Pop. 1280 and download it.

“Oh, lots of stuff. Tons of stuff, actually.” He pulls out a planner book and riffs the pages, which are all blank. “Big, big projects. I've been thinking about trying my hand at old school Sword and Sorcery--you know, like those old Daw paperbacks with the cracked yellow spines from the 60s and 70s. What the turbo-geeks call 'Appendix N.' After that, definitely more hardboiled, maybe even something contemporary. Dystopian sci-fi, too. The sky's the limit, Big D.”

He begs me for cab fare back to his cyber studio apartment. It's embarrassing, and I've already sprung for the Sammy A, but what are you going to do? On his way out the bar, Garn convulses like he's just had a seizure and claws a shabby Moleskine out of his back pocket. “I've got it,” he says, writing furiously with a crayon stub, “it's a three-part novella about a crew of ne'er-do-well carpet cleaners, their naive boss, a right-wing radio host kidnapped by his own fans, and an organ-legging operation run out of a gated retirement community in north Tucson ...”

"Another round,” I say, waving to the bartender. 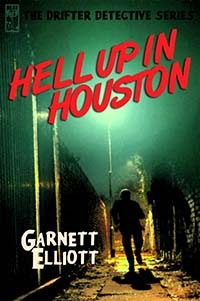 Posted by David Cranmer at 11:25 AM
Email ThisBlogThis!Share to TwitterShare to FacebookShare to Pinterest
Labels: David Cranmer, Garnett Elliott, hardboiled, Hell Up in Houston, Jack Laramie, noir, The Drifter Detective

I knew what "Appendix N" referred to without a moment's hesitation. Damn you, Elliott, I'm no turbo geek!

Enjoyed overhearing this conversation in the cyber bar. Music was from the juke in the back...(Google Juke in the Back plus "Matt the Cat")

Chris, I have no idea what you and Garn are talking about and, well, I'm not sure that's good or bad. I will Google now...

Appendix N is in the Advanced Dungeon and Dragons Dungeon Masters Guide, 1st Edition. It is a list of fantasy novels that "inspired" the game. Really shaped my early years as a reader.

Chris, when I use the term "turbo-geek" I mean it with the utmost reverence. What I'm really saying is "bad-ass intellectual."

Chris, And I grew up on every comic and graphic novel I could find as a kid. Toss in The Hardy Boys and that's my early education.

Garn, Our first books sold in England and Canada. Different for a change.

yeah, I get those kinds of weirdness ideas too. Day in day out. No time to write them. Probably they wouldn't sell worth a damn anyway. At least if I did them.

Overhearing conversations is one of my (unhealthy) habits. I enjoyed this one. :-)

I must definitely think about a kindle Fire!

A Cuban in London, And I appreciate folks stopping by and leaving comments.

Dave, Take your time. Something else will take its place.