I’m on the USS Enterprise, my first day on the job, walking around in jeans and a plain old T-shirt. I’m led into a room that’s to the right of the elevator in the original series. I know that’s not spatially correct, but I have bigger concerns ... I’m worried about what color shirt I’ll be wearing. Please don’t be red! I tell myself. In the room, I’m handed a ‘Spock’ blue shirt, and I sigh a relief.

I’m left alone to put it on. It feels comfortable (though I remember William Shatner said in an interview that they were not), but it’s too long, stretching almost to my knees. I don’t have time to think about it as someone comes in and whisks me away, out of the starship.

The Enterprise is docked on Earth, and it’s a beautiful sunny day. Apparently, back on board, the crew members on the bridge are preparing for an emergency drill training session that I will be leading. Sensing my unease, Kirk slaps me on the back and says, “You’ll do fine.” Then he escorts me back to the bridge. The training begins with a scenario of another ship’s crew in danger on a foreign planet.

“Open all frequencies,” I tell Uhura.

I speak loudly into the air, asking, “How many casualties?”

“Seventy-nine,” a male voice crackles back from the imagined faraway outpost. Anguished screams and explosions sound in the background. They are under attack from a formidable opponent. Probably Klingon.

I tell him what to do to save his crew and repair the situation. “Keep me posted,” I command with authority. I click off the intercom, and then as an afterthought, I click back on, adding, “But don’t call us, we’ll call you!”

My lame joke is well received with everyone on the Enterprise Bridge as they double over with laughter. 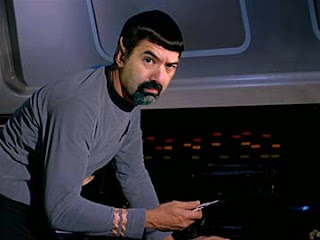 Not quite the Kobayashi maru. :)

Not in the least, Charles. Starfleet standards have dropped.

OMG...haha..i laughed so hard. Kayla would love this. And Kyle would be so amused. You really look great though, not sure you have the eyebrow lifted high enough.lol

It was quite a photo shoot, Mates. Getting the eyebrow to Nimoy heights is more difficult than it looks. Yeah, I remember Kyle photo shopped with Kerouac and Ginsberg. And I'll send Kayla the link.

Hello down there ...I yell from the stratosphere!

Wait! I thought you were down there and I was up here, Sis!

Gives new meaning to the word risible. Thanks.

Risible is a good word.

Red is bad, Heath, unless you have a full five year contract.