So back in July 2011, I had a germ of an idea for a new character (probably after watching too many Toshiro Mifune films) named Reeves who's in possession of a priceless sword that is stolen. Cliché, right? Well, Tom Pluck also grew up on the same ninja and samurai films that I did (let’s hear it for The Challenge!), and, having a much sharper idea, came up with BLADE OF DISHONOR. 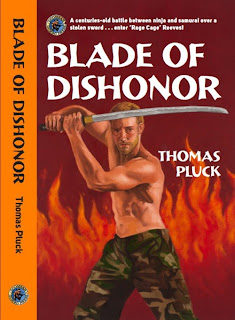 Taught to fight by his war hero grandfather, Reeves comes home to find Grandpa Butch embroiled in a centuries-old battle over a treasured Japanese sword. Together they team up with Tara the hot-rodding ambulance driver and a secretive member of a samurai warrior brotherhood to take on a powerful clan of ninja and yakuza bent on sparking a third world war.

From the heroics of the Devil’s Brigade in World War II and the brutal underground fight scene of Tokyo to the American heartland, BLADE OF DISHONOR pits battle-hardened cage fighters against cunning shadow warriors in a thrilling adventure story that’s part Kurosawa and part Tarantino … with a ton of Pluck!


Tom will be at Bouchercon in Albany and will have copies of BLADE OF DISHONOR available at a store in the dealer’s room. Since I’ll be in the area, I’m planning on crashing the party and hope to see you there. But if you can’t make it, you can get the BLADE OF DISHONOR omnibus now from Amazon.
Posted by David Cranmer at 9:02 PM
Email ThisBlogThis!Share to TwitterShare to FacebookShare to Pinterest
Labels: Blade of Dishonor, Bouchercon, Ninja, Reeves, Samurai, Thomas Pluck, Toshiro Mifune

Pluck gives new meaning to playing with high stakes. The man is an amazing writer, with the imagination to go with it.

Cool. Have not heard of him before, I don't think. I'll check it out.

That Reeves is quite the cut-up. Sounds interesting.

He threw in everything AND the kitchen sink, Ron. Yeah, the Pluckster is a one man tango.

Right up your alley, Charles.

Let us know what you think, Oscar.