The middle-aged, ruggedly handsome editor over at BEAT to a PULP is offering up "Vin of Venus" as a free download for several days. Bydgoszcz's renowned Paul Brazill and I worked on the first "LoVINg the Alien" installment and then Mr. Garnett Elliott catapulted the proceedings into the pulp spheres with his continuing storyline. A strange but goody mixture of crime/noir and sword and planet that's best described like this:

Vin, bereft of half his limbs and his memory, struggles between two worlds--the mist-shrouded, verdant hell of ancient Venus and the mean streets of modern Europe--battling both alien monstrosities and underworld villains on his quest to recover his identity. Along the way he is aided by an unlikely cast of allies, as well as the mysterious, ruby-encrusted bracelet that serves as the only link between his heroic past and grim present. 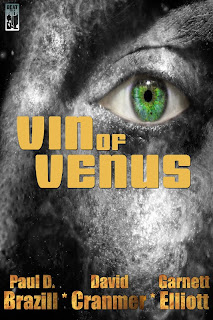 The novella ends on a cliffhanger, but I feel it's a very satisfying breaking point while we all wait for Garn to return from the Kingdom of Bhutan, where I have it under the strictest confidence that Henri Ducard himself is training GE in the arts of stealth and fear as a candidate into the shrouded League of Shadows.

Until then, readers and scribes of all ages, enjoy "Vin of Venus" and have a stellar weekend.
Posted by David Cranmer at 8:58 AM
Email ThisBlogThis!Share to TwitterShare to FacebookShare to Pinterest
Labels: crime, Garnett Elliott, noir, Paul Brazill, Sword and Planet, Vin of Venus

What happened was, all the money, fame, and non-stop hounding by both the media and groupies got to be too much, so I dyed what's left of my hair and now I'm hiding out in a Notting Hill flat with a fading rock star who looks suspiciously like a young Mick Jagger and his two lovely Bohemian companions.