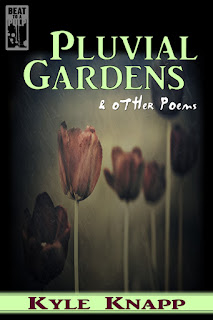 But I am getting ahead of myself. Kyle and I have some work to do.
Posted by David Cranmer at 4:01 PM
Email ThisBlogThis!Share to TwitterShare to FacebookShare to Pinterest
Labels: family, Kyle Knapp, Pluvial Gardens, poetry

My prayers are with you and your family, David. So sorry for your loss.

Very sorry for your loss, David. My sympathies to you and your family.

I am so very sorry for your loss, David. Good on you for keeping his dream and his work alive.

Leah, Thanks. And working on his poems is a healing all its own.

This breaks my heart! So sorry!

Sorry for the family's loss. Words fail us at moments. You expressed them eloquently. Kyle sounds like an exceptional young man and it will be a loss to us all. What might he have produced.

David, my sincerest condolences for your loss and I'm looking forward to what you'll be able to edit of his work.

You're doing right by your family, Dave. Your talent and work have allowed an artist to flourish, even though his time was short. My condolences.

He had a poet's heart, Patti.

Randy, Chris, G.B., Thank you for stopping by. It means a lot.

Your words are deeply appreciated, Garn.

David, my deep condolences for your family's loss.

David, if you would be able to send a piece of audio or video of someone reading a poem by Kyle, I would love to post it on Sunday Night Poetry. It that isn't possible, perhaps just the text. I looked on you tube, but only found another Kyle playing a guitar and I assumed that wasn't him.

Thank you, Tom. The outpouring of love and support does help.

Patti, I will get something to you in the coming weeks. It would have meant a lot to Kyle to be included with those legends you showcase.

I'm very sorry to hear this. I'll send up some prayers.

Very sorry for this loss, both to you and your family, and to lovers of poetry everywhere. I'm glad we will see a some more of his work.

Words I needed to hear this morning, Mike. Thanks.

Charles, I'm reading through the fifty plus poems he left behind. He loved and breathed poetry even more than I realized.

A tragic story that puts my present troubles in perspective. I can only wish you every success with your venture(s) on Kyle's behalf. Meanwhile, every blessing to you and your family. (I shall watch out for the paperback.)

Dave, His death has put a lot in perspective for me. So much I thought was important falls away. I just want him back.

David, I am so sorry for your loss. I hope you find some measure of solace in Kyle's work.

Get It On Brother! Love you guys! Proud of you!

Just catching up with you. Sadness. And good thoughts for you, my friend. What a gift to have his poetry to read. What a gift you are to him and his memory. Hang tough.

So sorry to hear this, David. I hope the project brings you the closure you need.

Lots of comfort, Naomi. What I'm working on now makes for a great deal of peace.

Neliza, When I get his complete body of work published, I hope it softens the heartache. But I'm not sure.