Police detective John Tallow witnesses the brutal murder of his partner by a schizoid psychopath referred throughout GUN MACHINE as the Hunter. Tallow’s crime scene begins with the Hunter’s apartment that is packed with a plethora of guns lining the walls, carefully linked (almost like an H.R. Giger painting) with each weapon representing an unsolved murder of the last twenty plus years. Tallow’s superiors allow him to work the case (when in reality he should be on extended forced leave) but tie his hands for genuine results by limiting him from police resources needed, and it soon becomes clear to Tallow that someone wants him to fail in his search for the Hunter. 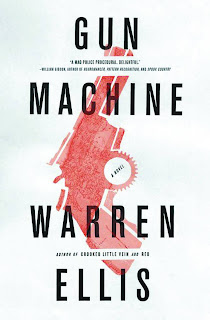 The high point of GUN is the Hunter himself, who believes he is walking the Manahatta landscape when the Lenape peoples of North America were present. Ellis writes these passages in such a convincing manner that I felt like I was inside the impaired brain that evidently short-circuited a long time ago. I hope when Hollywood comes calling (Tinseltown already filmed RED by Mr. Ellis), they don’t try any gimmicky camera tricks to express the amoral, hellish vision of the Hunter. One just needs an actor on the Robert Mitchum or Javier Bardem level to express the unscrupulous, mentally unstable monster.

Mr. Ellis has a solid handle on writing the classic detective novel. It’s crisp storytelling with engaging, well-developed secondary characters (if a bit—geeky misfits banded together—cliche), and robust action sizzling at the right hardboiled turns. Within a few chapters, I was won over by the battle-wearied John Tallow who becomes a man with a single obsessive goal—regardless of the consequences—of tracking his prey down. The ingenious way he works around his superiors with the help of his tight-knit band of police brothers and sister brought a smile to this ‘tired of bureaucratic red tape’ reader’s face. GUN is well paced for two thirds of the novel but I started feeling (around chapter thirty) that I wanted to get to the end a tad bit faster (a novella would have been perfect) but stuck with it and was rewarded with Tallow’s very high tech way of tracking the killer to a satisfying showdown.

My first Warren Ellis John Tallow novel. It won’t be the last. GUN MACHINE is well worth your time and money.
Posted by David Cranmer at 8:03 PM
Email ThisBlogThis!Share to TwitterShare to FacebookShare to Pinterest
Labels: detective, Gun Machine, John Tallow, Warren Ellis

Thanks for the heads up!

I agree, a Robert Mitchum-like actor would do justice to the part.

CROOKED LITTLE VEIN was excellent too.

Patti, I remember VEIN received a lot of applause. It's on my list for '13.