The World of Cash Laramie and Gideon Miles 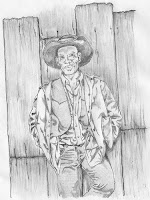 My Cash & Miles adventures mostly take place in the 1880s. An upcoming story is set in 1885 to be exact which, as you can see, was a busy year.

March 4 – Grover Cleveland succeeds Chester A. Arthur as President of the United States.

May 2 - Good Housekeeping Magazine goes on sale for the first time.

June 17 – The Statue of Liberty arrives in New York Harbor.

July 6 – Louis Pasteur successfully tests his vaccine against rabies. The patient is Joseph Meister, a boy who was bitten by a rabid dog.

July 14 – Sarah E. Goode is the first female African-American to apply for and receive a patent, for the invention of the hideaway bed.

July 23. News of the death of Gen. U. S. Grant, at Mount McGregor, N. Y., received at Philadelphia at 8.12 A. M. The State House bell was tolled sixty-three times, one stroke for each year of his age. Immediately flags were hoisted at half mast in all parts of the city.

November 7 – Canadian Pacific Railway: In Craigellachie, British Columbia, construction ends on a railway extending across Canada. Prime Minister Sir John A. MacDonald considers the project to be vital to Canada due to the exponentially greater potential for military mobility.

It's the period I live a lot of my time in. A fascinating decade when the Old West and the modern world existed at the same time. Nifty that Cash and Gideon get to come to life during those years.

A complex and fascinating period in our history. I mean how many folks know of Sarah E. Goode and her accomplishment that year? I'm guessing not many. I spend a fair amount of time there myself, Ron.

The world is changing a lot right about then.

There's some here I didn't know about. Fascinating, and a good lead to Wikipedia to see what happened in a specific year.

Most interesting. I had no clue about Sarah E. Goode. Did not know that was the year of The Last Spike (Pierre Berton's book about the CP Railway.)

Patti, That period left quite a few behind. THE EDUCATION OF HENRY ADAMS (one of my favorites) touches on the changing times.

Laurie, I enjoy the timelines you can find on various websites. Some have even more details/events than Wikipedia.

Leah, You snuck in here while I was leaving my comment. :)

Yeah and being farther south than you, I spent quite a bit of time learning about the CP Railway today. I love history and finding snippets I didn't know before.

I just got lost in the history of The Rock Springs Massacre. There may be a Cash Laramie story in there.

The late 1880's-90's are a fun time to learn about. How interesting about the rabies vaccine & elephant. There's a lady on twitter who tweets as this timetraveling victorian professor who is obsessed with late 18th century teas. Funny. Good to what's happening in the time era of Cash & Miles.

Jodi, I'm finally on Twitter. I clicked over and am following you now. The Victorian prof sounds quite unique and I'm glad you enjoyed my little history today.

That era was a fine time for growing up as found by my pop who was born in 1883. Looking forward to the new Cash and Gideon's.

Kind of cool to gather this info. I should do this for my own western stories for sure.

Its part of my Cash and Miles Bible. Nik Morton suggested I put it together and its been invaluable since.