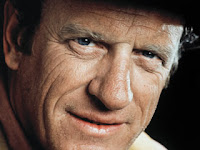 Damn. One of my childhood heroes has passed away. RIP.

The towering actor, who passed away Friday, was best known for playing Marshal Matt Dillon on the small screen for 20 years.

I didn't even realize he was still alive.

Man, when I was a kid I wanted desperately to be Matt Dillon.

My earliest memories of television viewing was with my dad watching Matt Dillon.

I expect Doc, Miss Kitty, Chester and Festus are sitting together in the Long Branch raising a beer in welcome.

He scared the devil out of me as The Thing in the 1951 movie, "The Thing From Another World". I think I'll always remember him for the role of that monster.

His brother Peter Graves died last year. A lot of talent in those two.

David,
Probably my earliest memory of watching television is of watching the very first episode of GUNSMOKE with my father. For many, many years, watching HAVE GUN, WILL TRAVEL followed by GUNSMOKE was the Saturday night ritual in our house.

Gunsmoke was always one of my favorites. Ditto THE THING. But I alos liked his turn as FBI agent Robert Graham in THEM!, the giant ant movie of the mid-fifties.

And I hope they make room at the end for my dad, Sandra. He was a big fan of GUNSMOKE and THE RIFLEMAN.

Tom, That is the other role he's known most for. THE THING still stand tall for many of us. And thanks for stopping by my blog, sir. Appreciated.

Patti, He did slow down and, of course, that is to be expected. I just checked and it appears his last film was playing Dillon in Gunsmoke V: One Man's Justice (1993). I watched the first in this series a few months ago.

James, And those are two of my favorite westerns from the early period. The others being BAT MASTERSON AND McQueen's WANTED. For me though, Arness/Matt was #1 and it was my dad that introduced me to the show as well. Good memories.

Randy, How could I forget THEM?! Love that movie and Arness was terrific in one of the first big bug flicks.

It's interesting to listen to William Conrad's Marshal Dillon from the radio series. He did a lot to help create that character, but Arness added the warmth that made him so appealing.

I saw this on the tail end of a Fox News program.

I'm sure that Encore's Western channel will be doing something with him in the coming days/weeks.

BTW: got a link up to my latest pubbed short story.

If you have problems accessing my blog, it can be found at www.cynicmag.com under my full original name (story is called "Red Stripe)

David, I'm always interested in what shows get shipped acoss the pond.

Ron, I have been slowly working my way through the radio series. I wonder if Conrad had been of a thinner nature would he have been picked up for tv?

G, I'm looking forward to reading your story but it may be a few days. Swamped under this weekend.