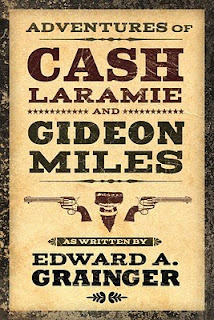 I have a confession to make: I’ve never been a fan of Westerns. Don’t get me wrong, I’ve got nothing against them—it’s just they never grabbed me in the way a good detective story grabs me. They always seemed to me as dusty as the desert towns in which they’re set, more museum pieces than living, breathing stories. Relics of a bygone era.

My Papa would’ve shaken his head to hear me say that. He was a cop, and a consummate storyteller; it was from him I inherited my penchant for writing and reading crime fiction. But Papa didn’t discriminate between a good cop story and a good Western. To him, it didn’t matter if Eastwood was wearing a poncho and a wide-brimmed hat or a suit and a badge—there the clicker stopped either way. I always figured it was generational—for Papa, crime and Westerns were of a piece, but as a little kid whose feet couldn’t reach the floor as I sat on the couch beside him, the Wild West seemed as far away as Roman times, and as textbook-dull as well.

So it was with trepidation I read the first Cash and Miles story David Cranmer sent my way. “Miles to Go,” this was. It’s not that I doubted David’s talents as a writer—I simply felt that Westerns were (caps warranted) Not My Thing. I figured I’d give the story a skim, find a sentence or two I thought worth highlighting, and pass along a “Job well done.”

Instead, I found myself riveted. Cash and Miles proved to be nuanced, interesting characters, men whose honor and decency divorced them from the petty prejudices of their time, but whose backgrounds placed them in the centers of said prejudices nonetheless. What’s more, the deft hand with which David dealt with matters of class and race made the story...well, not modern, exactly, so much as timeless and universal, and certainly a far cry from the museum pieces of my youth. And to cap it all off, the story itself was breakneck: a thrilling manhunt, a tale of battle-hardened friendship, all draped effortlessly in Western trappings. For me, the story struck the perfect balance between crime and Western fiction, and in so doing, provided me an entry point to a vibrant genre that had heretofore proved inaccessible to me.

Since that day, I’ve eagerly consumed every scrap of Cash and Miles I could get my eyeballs on (occasionally, I confess, nudging David to write another when I’d exhausted the existing supply). And I’ve started delving into the Westerns of David’s fellow fence-straddlers—guys like James Reasoner and Elmore Leonard, who, like my Papa, didn’t see much of a division between cowboys and crime at all.

I don’t mind telling you that, in this instance, being proved wrong doesn’t suck a bit.

‘Course, if my Papa were still around, he’d be sure to say I told you so.
Posted by David Cranmer at 2:12 PM
Email ThisBlogThis!Share to TwitterShare to FacebookShare to Pinterest
Labels: Cash Laramie, Chris F. Holm, Gideon Miles

Very nice. I used to believe that if you were on the road, staying in a hotel, and an Eastwood movie showed up on the television, it was a good omen. I also used to drink a lot...

Ron, If it didn't look odd I would get Holm to do every one of my forewords.

AC, There was a time you couldn't turn on a boob tube without seeing Clint or Sly.

I had to look at it twice to see who was actually writing the foreword and ended up with a new respect for David for convincing another fan to take a look at Westerns. And to Mr. Holmes, a fine bit of writing.

I'm curious, will you and Chris be watching COWBOYS WITH ALIENS?

Oscar, He really did a fine job. I couldn't be happier.

Alyssa, Hell yeah to Cowboys and Aliens! The Legend likes a good mashup.

articulate and so holm.

Patti, I second that vibe as soon as we get the darn thing loaded.

And Mr. Cranmer, I can't wait to read this puppy. I've enjoyed some of the stories elsewhere ... but collected? Now that's a reading event.

Hmm...I guess many readers mistakenly think of westerns as "relics of a bygone era." It's one reason why the tagline "Western Fiction for Today's Readers" goes on the covers of Black Horse Extra paperbacks and ebooks! Back in the March 2007 edition of the online Black Horse Extra magazine in the article "Detectives in Cowboy Boots" I made my own confession: "...a lifetime's enjoyment of tightly plotted crime thrillers ensures I'd be less than satisfied with writing a Chap O'Keefe western which didn't contain mystery and suspense. For stories about the series character Joshua Dillard, an ex-Pinkerton detective, the elements are routinely accommodated." Similar can be said for the Misfit Lil books like Misfit Lil Cheats the Hangrope.

What a classy opening for Cash. Gotta love it.
Can't wait to read all the stories together as a whole.

Jodi, I think Holm is too good. Hard act to follow.

Charles, Your KILLING TRAIL and Holm's 8 POUNDS are the two eBooks I've used as examples for my own.

I only dip in the westerns for Cash and Miles and have been waiting for this collection.

Thanks, Jim. I hope you enjoy the collection. It should be coming your way sometime tomorrow.

Congratulations for a fabulous review!

The storm just started here. No quarter size hail yet. I hope it breaks the heat and humidity. I actually went swimming today in tidal water.

Storm just hit us now and it has cooled things down nicely. But I'm not a big fan of thunderstorms, Sarah. My wife thinks they're cool. But I'm under the bed sucking my thumb.