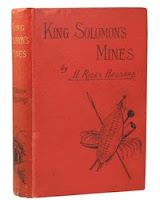 Maybe because I’m close to that half century mark, I find it refreshing the KING SOLOMON’S MINES protagonist—Allan Quatermain—is fifty years of age, not the current hero standard of twenty to thirty something.

Also welcomed is the easy to read narrative from A.Q. that doesn’t seem all that dated. Other books I've read from this period have left me scratching my head as to what was being said. Amusingly, the introduction has Mr. Haggard as A.Q. stating:

And now it only remains for me to offer apologies for my blunt way of writing. I can but say in excuse of it that I am more accustomed to handle a rifle than a pen, and cannot make any pretence to the grand literary flights and flourishes I see in novels...

Of course, there is language and ideas that reflect the times. Of particular note in chapter one is the use of the N-word. From Wikipedia:

Although the book is certainly not devoid of racism, it expresses much less prejudice than some of the later books in this genre. Indeed, Quatermain states that he refuses to use the word "nigger" and that many Africans are more worthy of the title of "gentleman" than the Europeans who settle or adventure in the country.

So, even though Haggard is advanced in his thinking for a 19th century man, he's obviously not perfect. I’m interested to see how later chapters handle descriptions and motivations of the locals.

Your thoughts?
Posted by David Cranmer at 9:09 PM
Email ThisBlogThis!Share to TwitterShare to FacebookShare to Pinterest
Labels: reading

Hard to know what's racism and what's classism in fiction from this period. Q's point about Africans deserving to be called gentlemen suggests that the n-word is more a designation of class than race. He's portraying himself as traveled and worldly, able thus to judge character better than readers who've never left home.

There's some nationalism in Q's attitude, too, linked to racial superiority. Didn't the British Empire extend over 25% of the world's population at this time?...Thanks for starting a thread.

"... is more a designation of class than race." I read it that way as well, Ron.

I believe the quote was "The empire on which the sun never sets." And I'm betting colonialism will factor in substantially by the end.

I’m pleased to find A.Q. more richly developed than popular media has led me to believe. The movies had me thinking of the clichéd manly adventurer, while Alan Moore’s depiction of him in The League of Extraordinary Gentleman (the comic book) is almost the opposite, and perhaps arguably just as stereotypical.

As to his character, I had to chuckle at the irony of this line:

“Of course,” said I, for I rather pride myself on my discretion, for which, as Sir Henry had heard, I have some repute.

And yet here he is, writing it all down, airing the Curtis family laundry for an audience of readers that would enjoy this book and reach into the tens (hundreds?) of thousands during the next century.

Anyway, I had said that in the introduction to the edition I have, it is pointed out that while Q comments on the "n-word", he consistently uses the word kafir which is a term in South Africa every bit as offensive. It also points out various questionable descriptions he uses, and some mean-spirited jokes concerning Africans.

Hard to judge writers from this era -- or guys like Burroughs or Howard -- with our modern sensibilities. Enlightened they may or may not have been for their time, but words change. Who knows what words we commonly throw around now that will be unthinkable to use 50 years from now. Hell, the way I see some people throw around terms like "redneck", "white trash", "faggot" and "whore" make me bristle already. I'm sure I'm not the only one.

Rich, My vision of A.Q. was corrupted early on by the Chamberlain film. And like you, I enjoy Extraordinary Gentleman but had no idea a more intriguing character waited in the original. I have to chuckle at your astute observation of the Curtis laundry hanging out there. Too funny.

Chris, I just looked up kafir and the definition is a term used in a Islamic doctrinal sense, usually translated as "unbeliever" or "disbeliever", or sometimes "infidel". The term refers to a person who rejects God or who hides, denies, or "covers" the truth. Yeah I can see where folks would be offended.

Oh and you're right about today's language in books. I'm betting a majority of it won't be looked on favorably a hundred years from now.

Great book. As are the others in the series.

It's early in the morning and I got a jump on the rest of you, just finishing chapter two.

Per the current thread, I take the attitude of these early writers with a grain of salt. As pointed out, one doesn't know exactly what the words might have meant. Example, some of these early books refer to people being gay in an entirely different sense.

Evan, Using the sometimes reliable Wikipedia I count eighteen adventures. It appears Haggard had a good run right up to a few years before his death. Now I'm wondering who was fiction's adventurer prior to Quatermain? Obviously A.Q. influenced everyone from Doc Savage to Indiana Jones after but was there someone before?

Randy, Very true that words can change meanings with time.

But I believe (I could be wrong here) colonialism was a super controversial topic even in 1885. Many folks didn't have the warm feeling about England conquering the globe in the name of the Queen and spreading their 'superior' culture.

Btw I think you're going to have trouble with one chapter a day. You usually read a book while most people are brushing their teeth in the morning. :)