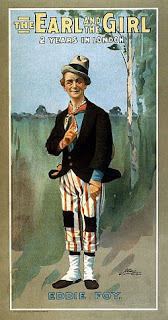 I was doing some research on 19th century actor Eddie Foy when I ran across a tidbit about Foy, Charlie Chaplin, and Wyatt Earp in Wikipedia. This was new to me:

In later years, Foy told of an altercation over a girl with fellow actor Charles Chaplin, who was drunkenly taking pot-shots at Foy. The gunfire awakened Wyatt Earp, who disarmed the actor and sent both the players home to sleep it off. Foy is also rumored to have been in Tombstone, Arizona in October 1881 appearing at the local theatre when the Gunfight at the O.K. Corral occurred on the 26th of that month.

Amusing and I'm thinking this would make a fun short story--the annoyed lawman, the drunken Tramp, and the outcome.
Posted by David Cranmer at 9:52 AM
Email ThisBlogThis!Share to TwitterShare to FacebookShare to Pinterest
Labels: Wyatt Earp

I'll always be left wondering about the comment that never was.

I love coming across tidbits like that. Those little hints of things that send your mind working.

It's like some truths you can't make up. That would be just totally weird. Does sound like a fun story

Well that sounds like something Earp would do. Write the story! Give it some humor and you'll have a winner.

Chad, It doesn't happen that often to me but is nice when it does.

Charles, I kinda doubt the story but it is entertaining to think it happened.

Brian, I've been thinking of writing some Foy stories. Short, little throwaways. Maybe this would be the start.

Could have happened. It's a small world. The story reminds me of Blake Edwards' movie SUNSET, about Earp and Tom Mix.

True, Ron. And Earp did live in hotels around California circa that time period. It seems to me that Mr. Foy would have been a little old to be chasing the same age girls as Chaplin but then again
I just answered my own question. :)

Interesting! And to think I posted about Wyatt Earp last Monday!
http://barriesummy.blogspot.com/2011/05/my-town-monday-wyatt-earp-in-san-diego.html

That was a great post, Barrie! I actually had read it but forgot to comment which is quite unusual for me.

It's not hard to believe two actors sharing the same hotel or renting a bungalow next to Wyatt Earp in California.

There is always a ring of truth, Mr. Reynolds.